F-15s kept 'eye on the sky' during Super Bowl 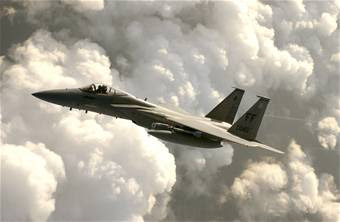 2/7/2007 - HOMESTEAD AIR RESERVE BASE, Fla. (AFNEWS) -- In the days leading up to Super Bowl XLI, Airmen from the Florida Air National Guard's 125th Fighter Wing at Jacksonville were ready to switch on engine power to their fighter aircraft in an instant.

While thousands of fans streamed into Miami, the wing's F-15 Eagles stepped up patrols, flying low-level patrols over local airports and Dolphin Stadium.

"Miami is one of the most heavily populated areas in the southeast," said Lt. Col. John Black an alert pilot assigned to the 125th FW. "With the Super Bowl, we just want to make sure we have the right things in place -- to take care of our people."

The alert mission allowed nearly 150 million spectators to keep an eye on the game Feb. 4, as the 125th FW Airmen kept an eye on the sky.

"Any time you can do something that makes sure our country continues to operate the way it is supposed to, it's good to be a part of that," Colonel Black said.

The U.S. Air Force Air Demonstration Squadron, the Thunderbirds, flew over the stadium at the completion of the national anthem at the Super Bowl. The team was also recognized on the pre-game show and during the game.

And here are a few of the many frequencies monitored during the Super Bowl and thanks to our South Florida Monitoring Team who forwarded their intercept info from the event.

And remember the March 2007 Monitoring Times magazine is in final production and it will include my new 8th annual air show guide, articles on attending/monitoring the Andrews AFB air show, and an exclusive look at the 193rd SOW. This issue always sells out so you might want to get your subscription started right now so you don't miss this or any other issue of Monitoring Times - the world's No. 1 radio hobby monitoring magazine.