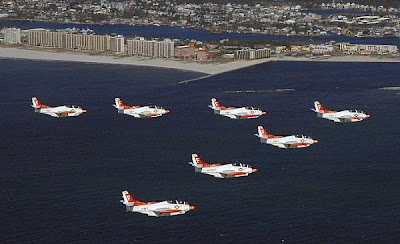 T-2 Buckeye aircraft attached to Training Squadron 86, training Wing 6, fly a seven-aircraft formation over Perdido Pass near Naval Air Station Pensacola. The flight is to mark the 50th anniversary of the first flight of a T-2 on Jan. 31, 1958. The T-2 will be replaced by the T-45 Goshawk. (U.S. Navy photo by Lt. Cmdr. Brendan O'Brien)

The seven-aircraft formation, led by Maj. Chuck Gant, was a tribute to longevity of the Buckeye, which has trained thousands of naval aviators in its 50-year history — and has flown more than 3.4 million flight hours, according to the Naval Safety Center.

VT-86 is the last training squadron in the Navy to use the T-2 Buckeye. Starting in April, the aircraft's replacement, the T-45 Goshawk, will begin arriving at NAS Pensacola. The Buckeye's final flight or "sundown" is scheduled for later this year in August.

The 50-year service span of the aircraft is considered remarkable, because jet designs of the 1950s frequently had short service careers during the rapidly developing jet age.

"It was conceived as a total-syllabus trainer," he said. "It's a multimission aircraft. It was originally used to train pilots to land on aircraft carriers and get them used to tactical missions such as dogfighting. The Buckeye's been a one-size-fits-all solution for us."

"It's a workhorse of naval aviation," Close said, "It's been training naval aviators for the last 50 years. For naval aviators it's near and dear to the heart, because it's been the primary jet for carrier qualifications, so a lot of aviators have cut their teeth flying this onto an aircraft carrier for the first time. It will be sad to see it go."

Four T-45 Goshawks are scheduled to arrive at VT-86 April 1. By year's end, nine Goshawks will have replaced the squadron's 30-year-old Buckeyes.

Al Tessier, an employee with NASP contractor L3 Vertex Aerospace, has had a long-term relationship with the T-2 Buckeye — almost 50 years. Tessier was plane captain to the prototype aircraft in 1959. Tessier said he has seen a lot of aircraft and a lot of aircraft retirements but admitted the T-2 is special to him.

"It's a tough old bird; it's trained thousands and thousands of pilots and it's got a darned good reputation," Tessier said. "There were a lot of jets coming on line at that time (the 1950s) Navywide and this one has outlived them all."

"I think the reason this airplane is still here is because it proved itself as a reliable platform," Hunt said. "It's a wonderful airplane and it's got life left. It's not like we couldn't keep flying it longer, we could. It's a cost/benefit decision. The maintenance program to keep up a small number of airplanes is more costly."

"It's a great airplane," he said. "It's a new technology and we need that technology to train. The closer we can replicate the aircraft that students are going to use when they get to their operational aircraft, the better off we are."

"Although we welcome the new technology that the T-45 provides, the Buckeye will be sorely missed."

After the aircraft's sundown, the last of the VT-86 Buckeyes will join other retired military aircraft in "the boneyard," a long-term preservation facility at Davis-Monthan Air Force Base in Arizona.
at 2/06/2008 09:45:00 AM