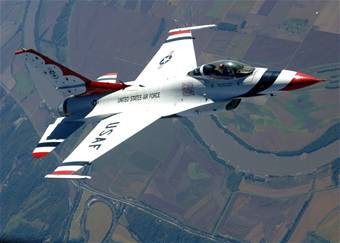 143.250 (AM mode) TBirds used during start-up. They were talking about waypoints, show manuevers, etc.

143.700 (AM mode) TBirds - seemed to be the main channel in use during the practice manuevers.

235.250 TBirds - was used after the main manuevers. They were chit chatting about their jets' performances. One pilot reported his jet was handling sluggish. They were talking to a female. Also mention of a water tank nearby that they don't recall being there last year and it wasn't brought up during the briefing. Not sure if there is a female pilot. I never heard one during the manuevers.

Other hits were on 141.800 which is a nationwide air-to-air. Not sure if it was related.

Also, 343.000 had some kind of air-to-air exercise. Not sure if related. These both were around the same time the T-Birds were practicing.

Later after the T-Birds were finished, The F-16 or F-22 demo team freqs came alive with manuevers.

They were switching between Victor and Uniform freqs, but 136.675 MHz seemed to be the primary.

140.050 (AM mode) kept coming up with air-to-air traffic. Not sure if it was related to the show. And the odd thing is, 140.050 is the US Navy Lakehurst base fire dept frequency in FM mode (which is located next door to McGuire AFB). So I'm guessing who ever was using it was from out of the area. Was on about the same time as the T-Birds.