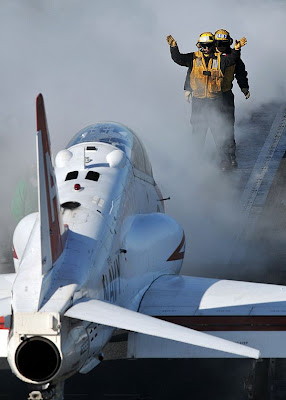 Student pilots assigned to Carrier Training Wing (CTW) 1 Training Squadrons (VT) 7 and 9, based in Meridian, Miss., and CTW 2 squadrons VT-21 and VT-22, based in Kingsville, Texas, flew aboard Dec. 10 for four days of initial carrier qualifications off the coast of southern California. For these new pilots, the arrested landings and catapult launches they completed aboard Lincoln are the culmination of many months of intense flight training.

"This is the first jet they've flown, and it's their first time on a carrier," said Lt. Cmdr. Mark Schadt, Chief of Naval Air Training's (CNATRA) senior landing signal officer (LSO). "They've spent the last 10 months learning to fly the T-45 and before that they flew T-34s (a propeller driven trainer) for up to 10 months. This is one of the last things they'll have to do before they go to a Fleet Replacement Squadron (FRS) and learn to fly their assigned aircraft."

After the training wing's arrival and early qualification flights Thursday, students gathered in Lincoln's ready room four to critique their landings with LSOs like Schadt. Many were still visibly excited from their first "traps" and conversations were animated as student pilots reenacted their final seconds before hitting the deck.

"It's a totally surreal experience," said 1st Lt. David Fickle, a prior-enlisted Marine assigned to "Eagles" of VT-7, who completed his first arrested landing aboard Lincoln Thursday. "I had seen all the videos and documentaries on the military channel, but when you actually get here, it's not like anything you perceived. Coming in, everything on the deck – the planes, the people − looks so much smaller, and then you definitely know it when you catch the wire. It's a huge adrenaline rush."

Fickle said that despite all the practice and instruction students receive flying carrier landing patterns and approaches at their home fields, nothing can fully prepare a pilot for the task of catching a wire on the comparatively tiny deck of a carrier while it's in motion. In the ultra-competitive environment of naval aviation, students who had distinguished themselves flying over land found themselves, quite literally, in the same boat with everyone else.

"You develop a certain pride in competition, and I was in the upper echelon flying "the ball" at the field," said Fickle. "But for me and a lot of others, this was a big punch in the guts. Today I was boltering like crazy, and I don't know if it was from the lens being a lot farther in front of me or seeing all the people and planes parked out there, but it was a very humbling experience."

Despite the sweat-drenched, white-knuckle landings, Shadt and Fickle both described launching from a steam-powered catapult for the first time as a more memorable experience.

"Most of the students are so focused flying the approach and getting their numbers right that they barely remember the landings, but for the launch they're just kind of along for the ride," said Schadt. "If you've ever been to Magic Mountain at Six Flags in California, they have a Superman ride there. It's a lot like the Superman ride."

The T-45 Goshawk is the U.S. Navy's version of the British Aerospace Hawk. Using the same airframe, it incorporates aspects of the F/A-18's avionics suite and the ability to land on an aircraft carrier to better prepare pilots to fly the Navy's premier fighter aircraft. One pilot who trained aboard Lincoln has experience in both the Hawk and the Goshawk.

Lt. Stephen Collins is an exchange pilot who has flown the Hawk for the British Royal Navy and is now training in the Goshawk with the "Tigers" of VT-9. Collins and four student pilots from India flew aboard Lincoln to train, as they have for the entire curriculum, alongside their U.S. counterparts. His goal is to qualify to the same standard as U.S. pilots so that he can fly U.S. F/A-18E/F Super Hornets as part of his exchange program.

"The U.S. and the Royal Navy have worked together very closely on the Joint Strike Fighter program," said Collins. "The ultimate aim is for us to get some experience flying a jet with very similar capabilities to that one. It's a good trade, the U.S. gets a pilot out of it and the Royal Navy gets the experience."
While student pilots of Carrier Training Wings 1 and 2 worked to overcome their inexperience, for Lincoln's flight deck and air traffic control personnel, the challenge was putting their own experience to work and avoiding complacency.

"For most of the people up there right now, having just completed a 7-month deployment, it's was almost business as usual," said Lt. Cory Pope, a catapult and arresting gear officer and Lincoln's V-5 division officer. "We just had to be a little extra cautious and remember that these folks had never done this before. We wanted to keep them safe too."
at 12/16/2008 10:17:00 AM