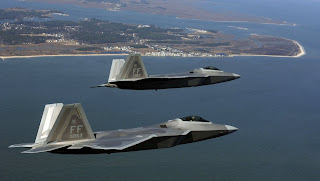 13th Air Force Public Affairs
1/10/2007 - HICKAM AIR FORCE BASE, Hawaii (AFNEWS) -- Air Force officials are scheduled to deploy a squadron of F-22 Raptors to Kadena Air Base, Japan, as part of U.S. Pacific Command's Theater Security Package in the Western Pacific in early 2007.
This will be the first overseas deployment for the Air Force's newest fighter.
The F-22 is a transformational combat aircraft that is effectively invisible to threats, cruises at supersonic speeds, is highly maneuverable, and provides the joint force an unprecedented level of integrated situational awareness. As part of continuing force-posture adjustments to address worldwide requirements, the United States continues to deploy additional forces throughout the Western Pacific.
This is the latest example of the flexibility U.S. forces have to meet our ongoing commitments and security obligations throughout the Pacific region by maintaining a flexible and credible presence.
at 1/12/2007 08:36:00 AM