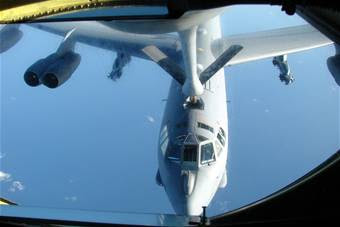 B-52 Stratofortress assigned to the 96th Expeditionary Bomb Squadron receives fuel from a KC-135 Stratotanker from the 506th Expeditionary Air Refueling Squadron March 23. Both units are deployed to Andersen Air Force Base, Guam, and flew to Australia last week in support of exercise operations at Australia's Delamere Bombing Range and to provide aerial support for the Australia International Airshow 2007. (U.S. Air Force photo/Capt. Chris Cooper)

3/28/2007 - ANDERSEN AIR FORCE BASE, Guam (AFNEWS) -- Andersen Airmen flew to the land 'down under' this week to demonstrate the capability and flexibility of the B-52 Stratofortress bomber to their Australian partners. They completed a series of scheduled Green Lightning exercise sorties at the Delamere Bombing Range while also providing aerial flyovers for the Australian International Airshow 2007 in Victoria, Australia.

The missions over Australia were flown under two different types of mission profiles. The Green Lightning missions were 12-hour, round-trip flights into the Delamere Bombing Range beginning and ending here. Later missions saw a B-52, along with a KC-135 Stratotanker for support, landing at the Royal Australian Air Force Base Darwin to fly sorties supporting the Australian air show.

"We departed Andersen and received 80,000 pounds of fuel from the KC-135 tanker accompanying us," said Capt. Mike Maginness, a B-52 co-pilot with the 96th Expeditionary Bomb Squadron. "We continued our mission to the Delamere Bomb Range where we received permission to employ six BDU-50 inert bombs.

"Along the way, we were escorted by and participated in joint training with Hornets from the Royal Australian Air Force," Captain Maginness continued. "The tactical experience of those flights was great training for both us and our Australian partners."

According to Australian Defence Force officials, this training follows two similar and successful visits last year. Such training provides a valuable opportunity for the forces to work together and hone their skills at a time when our alliance has never been stronger, officials said.

Following the Green Lightning missions, the deployed aircrews performed aerial flyovers for the Australian International Airshow. For one member of the 96th EBS, the air show support had special significance. B-52 navigator 1st Lt. John Coveney was raised in New South Wales and graduated from Kingswood High School in Australia. The event marked his first visit to the country since entering the Air Force in 1994.

"It was great to be able to show my family in Australia what I'm doing as part of the United States Air Force," he said. "My brother, his wife and five children drove 10 hours to be able to see our B-52 at the air show. He was really impressed with the sight of the B-52 knowing I was up there above him."

The performance of the B-52 and other Air Force aircraft on display at the air show left a positive impression of the joint cooperation between the U.S. and Australian flying partners.

The U.S. Ambassador to Australia, Robert D. McCallum, attended the air show, calling it a "celebration of the aerospace industry." The ambassador declared the air show an "affirmation of the strong Australia-U.S. alliance" wherein participants' impressive capabilities and ideas for the future were showcased.

According to Lt. Col. Jim Melvin, the 96th EBS operations officer, support of missions in Australia is part of the reason for the rotational bomber presence in the Pacific theater based at Andersen.

"The United States and Australia continue to be close allies in our shared commitment to maintaining peace and security in the Asia-Pacific region," Colonel Melvin said. "U.S. bombers working side-by-side with our Australian counterparts provide both nations' armed forces an opportunity to build on that shared commitment." 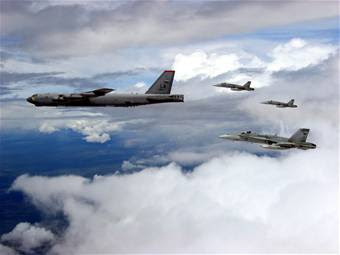