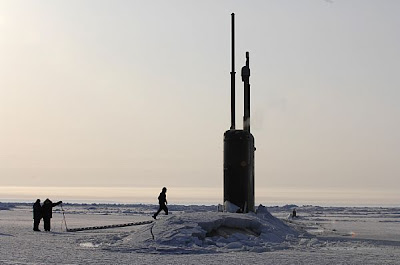 Los Angeles-class fast attack submarine USS Alexandria (SSN 757) is submerged after surfacing through two feet of ice during ICEX-07, a U.S. Navy and Royal Navy exercise conducted on and under a drifting ice floe.

Commander, Submarine Force has announced the participation of USS Alexandria (SSN 757), home ported in Groton, Conn., in a joint U.S. Navy/Royal Navy exercise being conducted in the Arctic Ocean in March and April.

Two submarines, the Alexandria and a Royal Navy Trafalgar class submarine will conduct the joint classified testing on submarine operability and war fighting capabilities in Arctic waters. Alexandria, commanded by Cmdr. Mike Bernacchi, will participate in ICEX-2007, under the operational control of Combined Task Force (CTF) 82 in Norfolk.

The exercise will be supported by the Applied Physics Laboratory Ice Station (APLIS) built on the Arctic Ocean sea ice north of Deadhorse (Prudhoe Bay), Alaska from which the exercise will be coordinated with Range Safety Officers monitoring movement of and communication with the two submarines.

The camp consists of a small village, constructed and operated especially for the ICEX by the Applied Physics Laboratory of the University of Washington. Following the completion of the ICEX operations, the Navy will share the camp for civilian scientific research as part of the International Polar Year.

The U.S. submarine force conducts exercises in waters around the globe, including the Arctic, in order to guarantee assured access to any ocean in the world. The submarine force continues to use the Arctic Ocean as an alternate route for shifting submarines between the Atlantic and Pacific Oceans.

In fact, submarines can reach the western Pacific directly by transiting through international waters of the Arctic rather than through the Panama Canal. U.S. submarines must continue to train in the Arctic environment to refine and validate procedures and required equipment in support of operational safety.