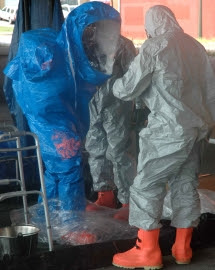 BALTIMORE (Maryland National Guard, Sept. 19, 2007) - Soldiers of the Maryland National Guard's 115th Military Police Battalion were among the first troops securing the scene at the Pentagon on Sept. 11, 2001, and six years later, some of these same Soldiers are fully engaged in a homeland defense exercise aimed at preparing for a potential repeat of that day's events - training they hope never to use.

It's called Exercise Vigilant Guard, and it's an annual training exercise sponsored by the National Guard Bureau at locations across the country. One such exercise took place in Maryland Sept. 5-7.

"Exercises such as Vigilant Guard ensure the National Guard is as prepared as possible in order to respond to any contingency that may occur," said Maj. Gen. Bruce F. Tuxill, the adjutant general of Maryland. "Having Soldiers and Airmen who are trained, equipped and ready for domestic emergencies is at the heart of the National Guard mission."

The terrorist attack scenario unfolded over the course of the three-day exercise. The first two days were played out on computer screens and communication equipment at the Joint Operations Center at Camp Fretterd Military Reservation in Reisterstown, Md., primarily testing the Maryland Guard's ability to coordinate and interoperate with other state and local agencies.

Using simulated reports - "notional injects" in exercise parlance - from a variety of sources, the scenario unfolded. First a truck bomb collapsed a span of the Woodrow Wilson Bridge during rush hour traffic. Next, a bomb exploded on a rail line, derailing a train near the Baltimore-Washington International Airport. As public concern spread, traffic approached gridlock and telephone lines become overwhelmed. Suspected terrorists next fired an anti-tank rocket at a train in downtown Baltimore, followed by a shoot-out with city police who found a suspicious white powder in their vehicle near the M&T Bank Stadium.

The third day of events was no longer just notional; it was full of action as National Guard troops, Baltimore City Police Department, Baltimore City Fire Department and other local first responders swung into action and actually implemented their response in downtown Baltimore.

A cloud of debris rose from a parking lot in downtown Baltimore as Maryland National Guard UH-60 Blackhawk helicopters landed near the stadium and began to disperse Soldiers from the 115th Military Police Battalion's Initial Reaction Force. Soon the Guardsman had assessed the situation and deployed their forces, setting up checkpoints and patrolling the streets.

Meanwhile, Soldiers and Airmen of 32nd Civil Support Team, who specialize in detecting nuclear, biological and chemical weapons, donned blue HAZMAT suits and attempted to analyze materials at the scene.

For added realism, the whole operation was under the scrutiny of "mock media" - reporters and news cameramen played by members of the Maryland National Guard and the Maryland Emergency Management Agency.

As the military police and HAZMAT teams worked to contain the situation, members of the 29th Mobile Public Affairs Detachment and the 175th Wing formed a Joint Media Operations Center to respond to reporters' questions and increase the flow of information to a worried public.

In the end, the scene was secured and the threat identified.

More important, the goal of the exercise was achieved: to prepare for the worst. As Vigilant Guard came to a close, Col. Pete Hinz, the Joint Task Force commander, reflected on the overall intent of the exercise.

"Although this was a National Guard Bureau sponsored event, Vigilant Guard really encapsulated some of Gov. O'Malley's 12 Homeland Security Goals. Three of the main goals we exercised here today were interoperability among many of the first responders, hazardous material recovery and training, training, training," Col. Hinz said.

"We have learned a lot from this exercise and will use these lessons learned to continue to improve our homeland readiness here in Maryland."
at 9/21/2007 07:54:00 AM