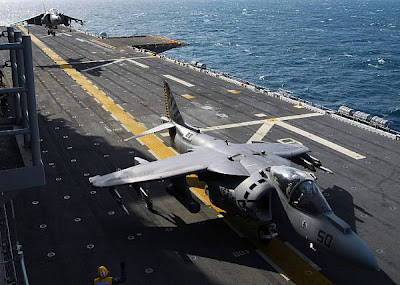 During the 17-day exercise, the strike group's seven ships and its Marine Landing Force from the 24th Marine Expeditionary Unit (24th MEU) were tested through several scenarios that the NASSG may face when deployed. Broken into two phases, the exercise provided a realistic training environment that ensured effective and intense training, and further ensured that the joint forces of the NASSG are interoperable, capable, and ready to deploy on short notice.

The strike group completed the first, or "Green," phase On Dec. 7, which focused on Marine Corps-centric operations. In that phase, the 24th MEU received various simulated taskings designed to be similar to those they will receive during deployment. In these scenarios, the Navy team of the NASSG served in a supporting role to ensure the Marine-led missions were met with success.

During the second, or "Blue" phase, the Navy element of the strike group was put to the test on a variety of Navy-centric missions likely to be encountered during deployment. From maritime security and presence operations, to a simulated strait transit to employing the rapid response planning process, the scenarios allowed for the strike group to train as it would fight: in an open, littoral operational environment.

"COMPTUEX was the first opportunity for the Blue/Green team to bring together all the Sailors, Marines and equipment to train and be tested in the full range of operations that the Nassau Strike Group brings to a joint force commander," said Capt. Bob Lineberry, commander, Nassau Strike Group. "The challenge was to bring the team together rapidly and perform numerous complex missions."

Conducted by a training team led by Commander, Strike Force Training Atlantic (CSFTL), COMPTUEX ensured that the collective forces of the NASSG attained the greatest capability and are ready for deployment on short notice. In today's world, properly trained, combat-ready forces are essential and according to Capt. Tom Chassee, officer-in-charge of the CSFTL expeditionary strike group training team that oversaw the NASSG COMPTUEX, the strike group was graded to a "robust" certification standard.

"At the end of the day, our job is to train, evaluate and recommend an ESG as 'major combat operations-ready,'" said Chassee. "As Commander, Second Fleet sends an expeditionary strike group to the 'the tip of the spear,' we ensure that they have gone through all of the likely warfare scenarios that they are going to encounter while forward deployed."

Given the current, real-world operational environment, a special emphasis was placed on maritime security and presence operations. These operations are intended to set the conditions for security and stability of the maritime environment as well as complement the counterterrorism and security efforts of partner nations. These operations also deny international terrorists the use of the maritime environment as a venue for attack or to transport personnel, weapons, or other material and serve to preserve the freedom of sea-going navigation and free flow of commerce.

In most instances, the ship served as a realistic OPFOR platform for the NASSG's various Visit, Board, Search and Seizure (VBSS) teams that allowed teams to practice both compliant and non-compliant boarding operations. The ship also allowed strike group vessels to hone its warning shot/disabling fire (WSDF) skills and their ability to pull along side vessels for boarding operations.

"The best part about being out here is that it's as close to reality as we're going to get," said Ens. Gavin Whittle, USS Philippine Sea's (CG 58) lead boarding officer. "To be able to train as we fight is an excellent opportunity for our VBSS team to ensure mission readiness."

The goal of COMPTUEX is to get ships ready sooner, and ensure they remain ready longer to respond to missions as they arise. Training opportunities such as COMPTUEX enhance the preparedness of all personnel to jointly respond to threats. The strike group moves next into its final exercise, the Certification Exercise (CERTEX), in January.

"I am extremely pleased with the training and the scenarios our Sailors and Marines received during the past two weeks," said Lineberry. "The team performed well and we look forward to our final test in January prior to our deployment."

Currently preparing for its regularly scheduled 2008 deployment, the NASSG is made up of more than 5,000 Sailors and Marines, and projects sea power ashore by maintaining the capability of landing amphibious forces by helicopters, amphibious track vehicles, air cushion landing craft, and assault craft.
at 12/19/2007 05:56:00 AM