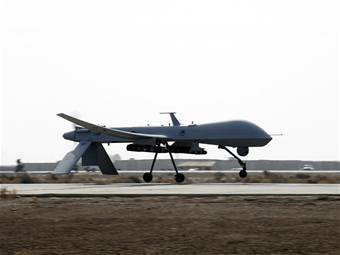 The stand-up is concurrent with the inactivation of the 53rd Test and Evaluation Group Det. 4. The Airmen, employees and equipment of the detachment will transition into the 556th TES.

The new squadron will provide support to UAS operations worldwide, through force development evaluations, the development of training, tactics and procedures, systems expertise and meeting warfighters' urgent need requests. The change also provides the unit with the efficiency and credibility to manage the increasing mission requirements of the UAS.

"Unmanned Aircraft Systems is a growth industry both with the numbers and types of vehicles, as well as the complexity of those machines," said Col. Ken Wilsbach, the 53d Wing commander. "This is an excellent opportunity to provide the warfighter with those advanced capabilities and tactics to support the war on terrorism."

The new unit already received three new MQ-1 Predators in February and anticipates another one by the end of the year. Additionally, the unit is scheduled to receive its first of four MQ-9 Reaper aircraft in 2010, thus increasing the workload and flying requirements. This knowledge drove the request for the transition.

Although the squadron is growing, the manpower will not immediately increase creating some unique obstacles.

"It will definitely be a significant challenge, but our job is to ensure the right improvements get to the warfighter as complete and as fast as possible," said Lt. Col. Ty Moyers, the 556th TES commander.

The colonel said the unit will augment their aircrew, which is qualified in multiple aircraft systems with experienced combat aviators.

"This is a team effort and we'll continue to work closely with our developmental test counterparts in San Diego along with the warfighters at Creech and Nellis (AFBs) to increase our efficiencies," he said.

He is honored by the outstanding Airmen under his command and their consistent ability to accomplish the mission and maximize the combat capabilities of our warfighters, he said.

The 556th was chosen by Air Combat Command for its lineage and history of surveillance. The 556th Reconnaissance Squadron, a C-130 Hercules squadron, previously held the moniker from 1968-1972.

The 53rd Wing's mission is to support the Combat Air Forces by testing and evaluating new/fielded weapon systems, aircraft systems and support equipment. The Wing is headquartered at Eglin AFB, Fla., and maintains 17 geographically separated units throughout the U.S.
at 3/12/2008 08:54:00 AM