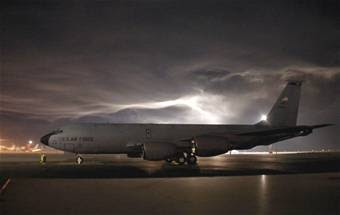 A KC-135 Stratotanker sits on the flightline at Manas Air Base, Kyrgyzstan, awaiting ground crews to de-ice the tanker before it takes off on a refueling mission. The new KC-45A will replace the aging fleet of KC-135s. (U.S. Air Force photo/Staff Sgt. Paul Clifford)

WASHINGTON (AFPN) -- While many are focused on the formal protest of the recent KC-45A contract award, the needs of the warfighter -- and the nation -- remain unchanged. The Air Force's nearly 50-year-old KC-135 Stratotanker must be replaced with a newer, more capable aircraft as soon as possible.

"This is a matter of national security and we can't lose sight of that as a nation. It's critically urgent that we get on with bringing a new tanker into our fleet; our global range and global reach rely on the tanker," said Gen. Arthur J. Lichte, the commander of Air Mobility Command. "Tankers give us the ability to go anywhere on the face of the planet and strike our enemies, or deliver cargo or humanitarian aid."

The tanker procurement, if it goes as planned, is still a 30-year process, which means Airmen could still be flying the KC-135 into the year 2040, the general said. Considering most airlines retired the commercial version of the KC-135 -- the Boeing 707 -- years ago, "It's unconscionable for us to ask our Airmen to fly in, and attempt to maintain, aircraft that are 80 years old," he said.

The aging aircraft puts a significant strain on maintenance and aircrews who keep them in the air, said General Lichte.

"The only reason the KC-135s are doing so well now is because of the total force Airmen at our bases keeping them flying," he said. "For every sortie we fly, aircrews and maintenance remain flexible and consider a myriad of options if the primary aircraft can't fly. Those Airmen make sure when that thirsty fighter is in the sky over Iraq or Afghanistan, or that C-17 Globemaster III or C-130 Hercules needs to provide food or relief to a country in need, they are able to accomplish their missions. They make sure those airlifters, rushing home with a wounded Soldier, Sailor, Airman or Marine, can get them to the loving arms of their families and a U.S. hospital for the critical care they need.

"The reason those tankers are airborne is because when they are deployed, our Airmen work six days a week, 12 to 14 hours a day to make sure they can launch them every day," he said.

Another issue facing tanker maintenance crews is the availability of parts for such an old aircraft.

"Just like an old car, you start it up and hope it'll make it. When it breaks down, you hope you can find the spare parts you need to fix it," General Lichte said. "That's the problem our maintainers face. Sometimes we have to go and manufacture new parts because there are no more left on the shelves.

"We've come a long way since the 1950s and '60s when these aircraft were sleek and new. Improved technologies and capabilities are available and we need to fold them into our tanker fleet," the general added.

Some key attributes of the new tanker will include the ability to refuel with both boom and drogue systems, and the ability to receive fuel as well as deliver it. Currently, for most KC-135s to conduct drogue refueling operations, a boom drogue adapter must be attached to the boom before takeoff. This prevents the tanker from refueling receptacle-equipped aircraft in the same sortie.

The new tanker is also expected to carry cargo and passengers, and have open communication architecture so it can receive data from the ground quickly.

"We've also asked for the new tanker to have defensive systems so we can fly closer into harm's way, and we've asked for systems that can defend against today's threats as well as emerging threats of the future," General Lichte said. "The bottom line is, the warfighter needs a new tanker," he said. "Any delays or hesitation are simply pushing the age of the tanker farther and farther out and increasing the risk to our national security.

"My hope is that as we go through this process of fielding a new tanker, following the letter of the law, we get through it quickly. And, when we come out on the other side, we get a new, very capable tanker to our Airmen as soon as possible," General Lichte said.
at 3/22/2008 07:32:00 AM