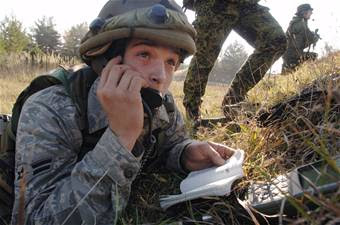 HOHENFELS, Germany (AFNS) -- In the profession of arms where timeliness, precision and control are the rules of the day, sometimes a little confusion, disorder and mayhem are good things.

It's especially valuable as a training tool for joint terminal air controllers who hang their hat in hell's backyard to direct lethal firepower on unsuspecting hostiles. These combat Airmen and their allied partners must learn to perform highly demanding mental and physical tasks in spite of their surroundings. Doing so is necessary for survival.

With those training necessities in mind, 90 U.S. and coalition personnel, along with tanker and fighter aircraft from five allied air wings met in early November in southern Germany to conduct a week long JTAC-centric exercise known as Allied Strike II.

Tech. Sgt. Robert Zachery, a JTAC instructor, led the exercise's urban warfare training. A veteran of five Iraq and Afghanistan deployments in his 12-year career, he said the latest tactics from the war provided accuracy to the urban scenarios that were designed to employ both physical and mental stress.

"Some people can think critically in an office environment with a cup of coffee, while others are good physically and can run real fast or move well on a football field. Trying to do both at the same time is tough for anyone," Sergeant Zachery said.

"I want guys to think, 'Wow, I've got a lot of things going on.' The idea is to task saturate these guys here in peacetime so that when they go downrange and encounter the same situation, they're gonna say, 'I've done this before...this is easy,'" he said.

One of the first urban warfare scenarios paired two Belgian forward air controllers, assigned to 3rd Battalion Para, Air Base Regiment, with a small American Army fire team. Their mission was to find and eliminate a high-valued target hiding in the center of a mock village.

Many of the 191 Soldiers patrolling with the Belgians recently returned from a 15-month deployment to Afghanistan. There, they reported, the enemy hid in wide expanses of rural landscape -- void of urban settings.

Army Spc. Nicholas Ranstad, a sniper, explained why JTACs were a valuable asset during that deployment.

"When we came into contact, (the enemy) was usually five meters behind a ridgeline 1000's of meters out and we'd never see 'em," he said. "(JTACs) could cover more ground than us because they had control of the birds and the pilots could relay 'We've got bad guys at such and such grid' ... and the JTACs would arrange to light 'em up. We loved to have those guys."

As the U.S.-Belgian team entered the outskirts of the mock village, the faint roar of French Mirages could be heard overhead. The fire team leader quietly signaled an advance across an open field toward a building suspected of hostile activity. A decision he soon regretted. Before snipers could repost against a distant rock wall, a barrage of gunfire fire from an open window replaced the silence of a cool, foggy morning. A few of the Soldiers were "gunned down."

The Belgian forward air controllers, still alive, followed the surviving security detail into a narrow alley between two houses to regroup. Unbeknownst to all of them, a different window opened above and showered AK-47 "death" on all but two remaining Soldiers.

"Remember, don't get caught up in the fight before you establish communications with air and don't be afraid to let the ground forces commander know what your needs are because he's got other things to think about," Sergeant Tonkinson advised the students.

With the forward air controllers "dead," the two surviving Soldiers had no way to request close-air support from the French pilots circling overhead. It was a valuable lesson for Airmen and Soldiers alike.

Europe-based JTACs don't normally get to train with their Army brethren outside of the joint and coalition exercise, said Maj. Jason Mooney, the 4th ASOG director of operations.

"If we didn't have this exercise, JTACs would be making all these mistakes in non-training scenarios," he said.

Major Mooney added that combat controllers seldom receive live-fire training that is costly and hard to find in Europe. The exercise was done on a shoestring budget of $5,000.

When asked what was most stressful about the exercise, the 20-year old native of Paris, Texas, said, "Everything, because it's all new. It's getting me to where I can actually do my job in real life situations. It's the first real training I've had with bad guys and weapons."