The "Hog" drops in on history 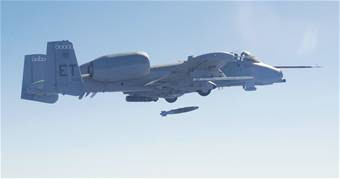 Maj. Matthew Domsalla, flying an A-10C Thunderbolt II Nov. 5, makes the first ever drop of a Laser Joint Direct Attack Munition, or LJDAM, from an A-10. This test proved a successful integration of the munition with the A-10, allowing for an outstanding precision targeting capability that will help Air Force aircrews continue to provide effective air support to coalition ground troops. Major Domsalla is with the 40th Flight Test Squadron at Eglin Air Force Base, Fla. (U.S. Air Force photo/Master Sgt. Joy Josephson)

EGLIN AIR FORCE BASE, Fla. (AFNS) -- The A-10 Thunderbolt II, nicknamed the Warthog and known for its close-air support superiority and the ability to carry large and varied ordnance, is now on its way to delivering a new capability to the warfighter.

A pilot from the 40th Flight Test Squadron at Eglin Air Force Base, Fla., with support from people with the 46th Test Wing, Boeing and a host of other units, flew a quick yet historic mission early in November. For the first time, a guided bomb unit-54, the Laser Joint Direct Attack Munition, or LJDAM, was dropped from an A-10C.

"There is a strong need to destroy moving targets in the AOR," said Capt. Kirt Cassell, the lead A-10C flight test engineer. "The Laser JDAM has shown to be very effective at destroying moving targets on other (aircraft) and Air Combat Command (officials) wanted to bring that capability to the A-10C for an upcoming deployment."

Captain Cassell and team members from the 40th FTS began planning this test mission in early October. That's a short timeline for a test mission, according to Captain Cassell. Plus, the team was challenged with ensuring the LJDAM worked correctly. To do this, the plan was to drop the bomb on a GPS target and then lase the weapon to another target downrange.

"The test was very successful!" Captain Cassell said. "The weapon functioned properly and released successfully, impacting the target almost exactly where the laser spot was located. We were able to demonstrate that the GBU-54 can successfully be integrated and dropped from the A-10C."

Maj. Matthew Domsalla piloted the historic mission. He's been flying the A-10 for more than eight years and knows that this added capability will make the A-10C even more lethal and more valuable to warfighters needing some firepower assistance.

"The LJDAM provides the pilot the ability to update the targeting if the target moves while the weapon is in flight," he said.

The A-10C has already demonstrated tremendous capability in supporting the war on terrorism. According to Lt. Col. Evan Dertien, the 40th Flight Test Squadron commander, putting this bomb on the aircraft "will give the A-10 an outstanding precision targeting capability that will help the Air Force continue to provide precision engagement."

And while making Air Force history is a great feeling for the 40th team, Colonel Dertien says the rewards of a successful test are more far reaching.

"When the weapons are proven in combat and you get feedback from the deployed flying units that a capability worked as expected and made a difference in the fight, that's the big payoff," he said.

The next step for the A-10C and LJDAM is to undergo operational tests to develop tactics and techniques for employing the weapon. If those tests prove to go as well as the first, Eglin's test team may have their feedback as early as January. The goal is to have this new precision capability deployed to the area of operations by early 2009.
at 11/15/2008 06:34:00 AM