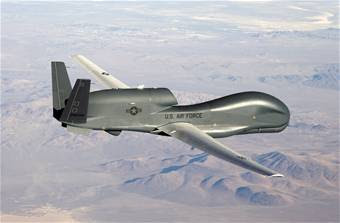 DAVIS-MONTHAN AIR FORCE BASE, Ariz. (AFNS) -- The RQ-4 Global Hawk unmanned aircraft is currently using its sensors for non-military environmental mapping missions over South, Central America and the Caribbean at the request of partner nations in the region.

The flights, dubbed "eco-missions" by the Air Forces Southern team, provide vital training to aircrews while supplying partner nations with high-quality, multi-spectrum imagery to be used by local governments.

The aerial photography is used for a variety of purposes, from counter-drug operations and disaster response planning to monitoring deforestation, urbanization and beach erosion, depending on what the requesting country is interested in tracking.

Six eco-missions were flown in fiscal 2008, and 12 are scheduled to be flown in fiscal 2009, according to Thomas Schnee, 12th AF (AFSOUTH) deputy chief of operational planning. The electro-optical and infrared cameras provide high-resolution imagery within the focus of coverage.

Airborne imagery from the Global Hawk platform has been used in the United States to track the effects of natural disasters such as wildfires and hurricanes. By comparing pictures of an area taken at different intervals, major environmental changes can be detected early. In cases of natural disasters, helicopter routes and landing sites can be identified in remote areas early to speed up the response times of emergency responders.

The Global Hawk is based at Beale Air Force Base, Calif. All flights to the AFSOUTH area of focus originate and terminate at Beale AFB. Due to the distances involved, the flight times through international air space can leave little time to collect images. Mr. Schnee said, in the future, having regional refueling locations with ground crews will increase the range and duration of Global Hawk missions. Currently, the unmanned system can spend up to 30 hours in the air for a single mission.
at 5/05/2009 05:43:00 AM