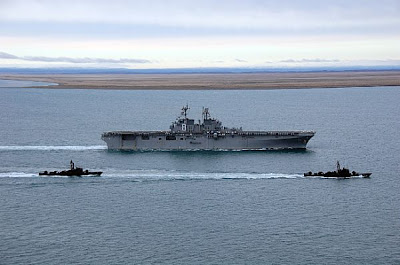 The amphibious assault ship Pre-Commissioning Unit Makin Island (LHD 8) is escorted by two Chilean Navy missile craft, Casma (LM 30) and Chipana (LM 31), as it enters the Strait of Magellan. Makin Island departed Pascagoula, Miss. July 10 and is circumnavigating South America while transiting to its new homeport at San Diego. Makin Island is the eighth and final Wasp-class amphibious assault ship and is scheduled to be commissioned in San Diego on Oct. 24. (Photo courtesy of Chilean Navy/Released)

SAN DIEGO (NNS) -- The Navy's newest multi-purpose amphibious ship, USS Makin Island (LHD 8), will arrive at her homeport in San Diego Sept. 14, bringing more than 1,000 Sailors and their families to the community.

Makin Island is the final amphibious assault ship built in the LHD-1 Wasp-class, but the first of the class built with gas turbine engines and an electric drive. Steam is not used on board for heating or water production as in previous LHDs. Other significant changes from previous LHD-class ships include the Watermist Fire Suppression Systems, a fiber-optic Machinery Control System (which is also integrated with the Damage Control Systems), the SPQ-9B radar and Cooperative Engagement Capability.

"At high speeds it runs on gas turbine engines and at lower speeds it runs on an electric drive -- just like a hybrid car," says Makin Island Commanding Officer, Capt. Bob Kopas, "Combined with this 'gas saving' propulsion plant is a new computerized machinery control system which is the most advanced in the fleet today. It controls everything from ventilation throughout the ship, to the engines, and ballasting systems."

This advancement results in significant fuel conservation. For instance, during transit from Pascagoula, Miss., to Lima, Peru, the ship consumed 673,148 gallons less in fuel than a steam ship completing the same transit, saving American taxpayers more than $1.6 million.

During her transit from Pascagoula, Miss., Makin Island conducted theater security cooperation activities with Brazil, Chile and Peru, which focused on working closely with partner nation civil and maritime forces - sharing methods and training to build on U.S. and partner nations' already strong relations and interoperability.

Makin Island is scheduled to be formally commissioned Oct. 24 in a ceremony in San Diego and witnessed by the friends and family of the ship's 1,100 plank-owners.

Makin Island will help provide deterrence, promote peace and security, preserve freedom of the sea and humanitarian/disaster response within 3rd Fleet's 50 million square mile area of responsibility in the Eastern Pacific as well as supporting the Navy's Maritime Strategy when forward deployed.
at 9/12/2009 08:16:00 AM