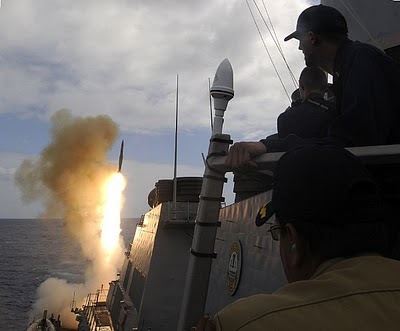 Hopper is engaging in several RIMPAC exercises, including a sinking exercises (SINKEX), a surface-to-air missile exercise and a Naval Surface Firing Support "Rodeo" exercise with other participating naval ships.

"There's a lot of experience to be gained for the people on board and their watch stations," said Cmdr. Kevin Melody, Hopper's commanding officer. "Another thing RIMPAC allows us to do is it let's us interact with our friends and allies around the Pacific region. It's about working together synergistically and taking the good thing that each of us brings to the table and creating something better as a whole."

"I think the benefits of having the Australian and the Colombians here on this ship is that they are feeding my youth - the junior enlisted, junior officers, the midshipmen and my chiefs," said Command Master Chief(SW/FMF/AW) Jay Stuckey, from the Hopper. "They know that they are the future."

"To actually see something like that, to have that experience where there's an expendable craft that's used as a target - that's outstanding," said Abbot. "To experience it firsthand is amazing."

The goal of the SINKEX training exercise was for the crew to gain proficiency in tactics, targeting and live-firing against targets.

"It made me exceptionally proud to see," said Abbott, in reference to the SINKEX. "To be able to hit the target is a good moment, and it really represented how efficient we are as a small navy. It's a great show of force from everyone."

Abbott, who been taking duties as a conning officer aboard Hopper since the beginning of RIMPAC, said that he was impressed at how friendly the crew was.

"I think the American people that I've met have been great," said Abbott. "The officers and enlisted alike have been really friendly. Everyone says 'good morning.'"

RIMPAC 2010 is a biennial event designed to strengthen regional partnerships and improve multinational interoperability. This marks the 22nd exercise in the series since the first RIMPAC exercise began in 1971.
at 7/17/2010 08:16:00 AM