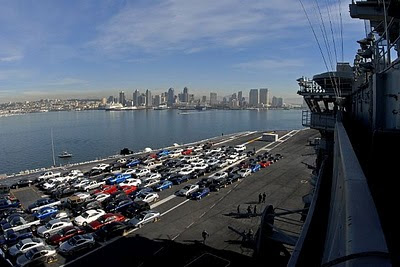 The privately owned vehicles of Sailors assigned to the aircraft carrier USS Nimitz (CVN 68) are parked aboard Nimitz in preparation for the ship's homeport change from Naval Base Coronado to Naval Base Kitsap at Bremerton, Wash. The ship is onloading more than 400 vehicles for the transit to Washington as part of an Opportune Lift program to assist Sailors and their families with the move. Nimitz is scheduled to conduct a docking planned incremental availability upon arriving in Washington. (U.S. Navy photo by Mass Communication Specialist 3rd Class Thomas G. Siniff/Released)

Nimitz has called the San Diego area home since 2001 when the ship shifted homeports from Newport News, Va., after completing a three-year complex refueling overhaul.

"I would be remiss if I didn't take the opportunity to say thank you to all the folks in San Diego who took care of our Sailors, and not only our Sailors, but their families as well while we deployed," said Capt. Paul Monger, Nimitz' commanding officer.

"I'm sad but I'm happy," said Lila Vasquez, mother of Aviation Boatswain's Mate (Equipment) 3rd Class Lourdes Torres, who is making the move up to Washington. "We're used to having her close by, but we know it is important for the ship that she goes."

Since 2001, Nimitz has deployed five times as part of Carrier Strike Group 11, including its most recent deployment from July 2009 to March 2010 in support of Operation Enduring Freedom and Commander, U.S. 7th Fleet.

"USS Nimitz has called San Diego her home for almost a decade, and we are grateful to the entire community for the support they have shown us," said Monger.

Puget Sound Naval Shipyard is the only government dry dock capable of accommodating a Nimitz-class aircraft carrier on the West Coast. The Navy expects to accomplish approximately 450,000 man days of work during the DPIA. Much of the work will be conducted by government workers at PSNS, but a substantial amount, around 72,000 man days, is expected to be accomplished in the private sector, with a significant effort being accomplished by the Nimitz crew.
at 12/07/2010 05:33:00 AM