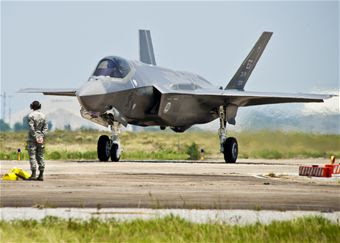 Milcom Editor Note: The first production model F-35 Lightning II to be assigned to the 33rd Fighter Wing, the Lightning II training unit, arrived at Eglin AFB, Florida, on 14 July 2011 after a ninety-minute ferry flight from Fort Worth, Texas. The aircraft, Air Force serial number 08-0747 (c/n AF-09), will be used for training F-35 pilots and maintainers who begin coursework at the base’s new F-35 Integrated Training Center this fall. The aircraft was flown to Florida by Lt. Col. Eric Smith of the 58th Fighter Squadron, the first Air Force qualified F-35 line pilot. No ICAO24 code uncovered yet.

Upon arrival, the jet officially became part of the Air Force inventory. It now belongs to the JSF training unit, the 33rd Fighter Wing.

Flying it in was Lt. Col. Eric Smith of the 58th Fighter Squadron, the first Air Force qualified F-35 pilot.

"It was a smooth ride in," said the colonel of the hour and 40 minute flight. "The jet behaved awesomely. I'm just so proud to bring it home to Eglin (Air Force Base)."

A crowd of 33rd FW people braved the 90 degree heat to watch the fifth-generation fighter touchdown and taxi in. Col. Andrew Toth, the 33rd FW commander, was the first to greet his pilot upon arrival.

"It's an exciting day here at the wing where our joint and integrated team has been preparing for this day since October 2009," Toth said. "I have no doubt the caliber of the Airmen, Sailors, Marines and contractors will provide safe and effective training operations at Eglin (AFB). Now, we look forward to the start of classes later this year."

Now that the aircraft is on station, F-35 maintainers will train and be certified here at home.

"It's pretty exciting," said Tech. Sgt. Brian West, the crew chief for the new aircraft. "We're thrilled to be able to train with one of our own."

As the world's first multi-role stealth fighter, the F-35 is known for its superior range, cutting-edge avionics and next-generation sensor fusion. Each model shares breakthroughs in combat performance, survivability and support, while each is specifically tailored for unique service needs.

Lt. Col. J.D. Wilbourne, the 58th FS commander, said he was thrilled to see his first aircraft arrive, one day before his change of command.