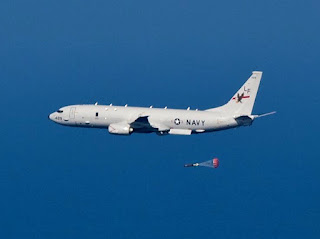 From the Royal Gazette:

Bermuda is back on the front line of the United States Navy’s efforts to combat Russian submarines prowling the depths of the Atlantic, The Royal Gazette can reveal.

A USN detachment and two hi-tech P-8 Poseidon submarine hunter aircraft has been deployed to the island and will conduct reconnaissance operations from the airport – a former US Naval Air Station that closed down 25 years ago.

Lieutenant Marycate Walsh, of the US 2nd Fleet, confirmed: “A P-8 Poseidon detachment arrived in Bermuda on October 30 to support operational requirements in conjunction with other US naval assets in the Atlantic Ocean.

“The detachment is scheduled to operate out of Bermuda for the next several months.”

She added: “The Navy frequently conducts exercises and operations in the Atlantic Ocean to maintain readiness, refine tactics, and support homeland defence.”

The P-8 is a military version of the Boeing 737 passenger plane armed with torpedoes, Harpoon anti-ship missiles, and other weapons and can drop and monitor sonobuoys designed to detect submarines.

It was introduced as a replacement for the ageing Lockheed P-3 Orion fleet as the service’s main anti-submarine warfare aircraft in 2013.

Lieutenant Walsh said: "The P-8 Poseidon aircraft is a versatile, multi-mission maritime aircraft and is one of many US Navy platforms operating in the Atlantic Ocean, at any given time."

The USN 2nd Fleet, based in Norfolk, Virginia, was re-established in 2018 to counter increased Russian activity in the North Atlantic.

The fleet, which operated at the height of the Cold War with the former Soviet Union, was abolished in 2011 because it was thought the threat from Russia had diminished.

The 2nd Fleet is responsible for ships, aircraft and landing forces on the East Coast of the United States and the North Atlantic, up to the Arctic.

Vice Admiral Andrew Lewis, the 2nd Fleet commander, warned earlier this year that the East Coast of the US was no longer “uncontested” or a “safe haven” for Nato ships and submarines.

He told a forum organised by the US Naval Institute and the Centre for Strategic and International Studies: “We have seen an ever-increasing number of Russian submarines deployed in the Atlantic and these submarines are more capable than ever, deploying for longer periods of time, with more lethal weapons systems.

“Our sailors have the mindset that they are no longer uncontested and to expect to operate alongside our competitors each and every underway.”

The US Naval Air Station, now a civilian airport, operated several squadrons of P-3 aircraft at its height and was run down after the collapse of the Soviet Union in 1991, decommissioned in 1995 and later handed back to the Government.

It began service in 1940 as part of the bases for destroyers deal which helped Britain to survive in the Second World War and was operated first as a US Air Force base and then as a Naval Air Station from 1970 until its closure in 1995.

Lee Rizzuto, the US Consul General, said last night: “The US Consulate thanks the Government of Bermuda for their support and cooperation of the US Navy as they conduct a series of exercises over the next several weeks.

“The opportunity to operate out of Bermuda will improve multi-domain cooperation while furthering the special bilateral relationship between the United States and Bermuda."