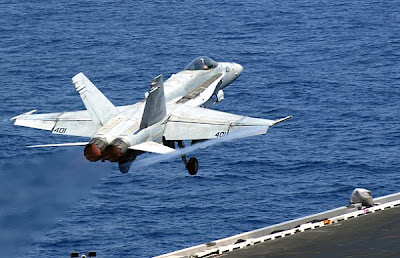 “Our primary task so far has been to support Operation Enduring Freedom (OEF) and coalition forces operating on the ground in Afghanistan,” said Rear Adm. Kevin Quinn, Commander Carrier Strike Group 3. “Reports from ground forces in combat say our aircraft are providing the support they need and are making a real difference in the fight against the Taliban. Not only are we helping our troops on the ground and saving lives, but we’re helping the Afghan people.”

Stennis Commanding Officer Bradley Johanson said the crew has met every operational commitment assigned and maintained a level of operational readiness second to none.

"The International Security Assistance Force (ISAF) is successful because of the devotion to service of every member of the multinational team. Our support to the troops on the ground has made a decisive difference in the region,” he said.

To date, CVW-9 has flown 5,671 sorties and has put in more than 14,800 flight hours. Since arriving in the U.S. 5th Fleet AOO, CVW-9 has flown 6,939 hours and has dropped more than 56,000 pounds of ordnance in support of coalition forces operating on the ground in Afghanistan.

Along with supporting OEF and ISAF, another mission JCSSG ships are conducting in 5th Fleet is MSO. Operating as part of the JCSSG, USS O’Kane (DDG 77) and USS Preble (DDG 88) have been primarily conducting MSO in the Persian Gulf since arriving in the region.

Interaction patrols are one element of MSO which focus on putting a friendly face on the coalition’s mission in the region. These visits to local mariners help to deter illegal activities on the high seas, as well as reassure them that coalition forces are operating in the region to ensure the sea-lanes remain open and are safe to navigate.

“The purpose of these operations is to connect with local mariners through the exchange of information in order to develop relationships and help them understand we’re here to help ensure maritime security and stability in this region,” said Quinn.

Upon Charles de Gaulle’s arrival to the region March 16, the two ships provided support to the ISAF on the ground in Afghanistan, and conducted bilateral exercises at sea and personnel exchanges between the strike group ships.

“I was incredibly impressed by the professionalism, dedication and level of cooperation experienced during our interaction with the entire French Task Force,” said Johanson. “They are our teammates and we were honored to have served with them here in the North Arabian Sea.”

Since leaving its homeport of Bremerton, Wash., on Jan. 16, Stennis has spent 104 days underway conducting operations and exercises in both the 5th and 7th Fleet AOOs.

“Logistics support is the key to any type of sustained operation,” said Mueck. “Without the reliable means to replenish bullets, food, fuel and general supplies, your efforts are destined to fail.”

So far, during Stennis’ deployment, the ship has completed 12 UNREPs, bringing on everything from food to repair parts and jet fuel. More than 8.6 million gallons of fuel have been received via UNREP, 7.5 million gallons of which have been issued to aircraft to conduct flight operations.

UNREPs are also a chance for large shipments of mail to be delivered to the ship which helps keep morale high. According to Chief Postal Clerk Orlando Hernandez, Stennis has processed in excess of 350,000 pounds of incoming and outgoing mail this deployment.

“Our largest shipment of mail to date was Feb. 24, just after arriving in the region,” said Hernandez. “We received 194 pallets of mail, weighing 48,000 pounds, and it took us six days to process to the crew.”

While UNREPs help keep ships supplied at sea, it’s the Sailors themselves who keep the ship running and ensure JCSSG successfully completes its assigned missions.

“I think we’re making a huge difference here, especially for the troops on the ground,” said Fire Controlman 1st Class Bret Levinton. “We're maintaining zero casualties in our communication and weapon systems; we’re launching planes every day; and our tactical operating system is always ready. We’re able to do this, all while interacting with the rest of our strike group ships and coalition navies. It's impressive to think of all of the teamwork that's involved in this, and how it goes off without a hitch every day.”
at 5/15/2007 07:40:00 AM