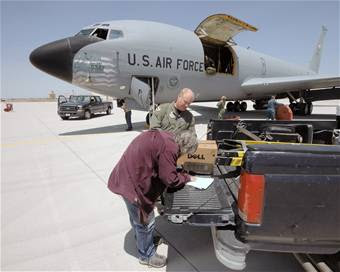 DAVIS-MONTHAN AIR FORCE BASE, Ariz. (AFPN) -- One of only two remaining KC-135 E model Stratotankers of the Utah Air National Guard was delivered to its final resting place April 24 to officials of the 309th Aerospace Maintenance and Regeneration Group at Davis-Monthan Air Force Base.

The aircraft touched down onto the Arizona flightline, its maintenance and service records were signed over to a 309th AMARG official, and the aircraft was prepped for induction into what has to be considered aircraft heaven, otherwise known as the "boneyard."

The "boneyard" is a 2,600 acre facility that got its start in 1946 storing World War II bombers and cargo planes, and has since grown into a modern, high-tech industrial organization managing an inventory of more than 4,460 aircraft, 29 aerospace vehicles and 350,000 line items of aircraft production tooling. The group's services include aircraft storage and disposition, parts reclamation and restoration to flight-level maintenance.

However, the fact that these aircraft will be stored provides little solace for those who flew them.
"This day may not mean much to some, but I have personally been flying that aircraft since 1983," said Col. Kelvin Findlay, the Utah Air National Guard's 151st Air Refueling Wing commander. "You become attached to an aircraft with such an impressive track record. It literally becomes a friend."

Tail number 60-0327 rolled off the Boeing assembly plant in 1960, originally serving the active Air Force and then the 191st Air Refueling Squadron of the Utah Air National Guard.

"The E-model modification was a far-sighted and cost-effective decision by the Air National Guard," said Col. Ron Blunck, the 151st Maintenance Group commander who served as both an enlisted crew chief and later a master navigator aboard the KC-135. "The E-model's performance was a vast leap forward from the A-model, and was a workhorse for the ANG for over 20 years. We could carry heavier fuel loads, and could stop on very short runways with the reverse thrust. The E-model was a very capable aircraft and would still be viable today, but the engines are no longer supportable."

After long service with the Guard and Reserve, the E-model variants of the KC-135 aircraft's days have come to a close. In October of 2005, officials of the 151st ARW received the first of its eight KC-135R aircraft . The re-engined aircraft uses the same airframe as it's A-model predecessors, but can offload more fuel, is more fuel efficient and much quieter than the KC-135E.

"Our maintainers received our R-models with mixed feelings, having to say good-bye to some good old friends," Colonel Blunck said. "I have nearly 4,000 hours in the E-model and I will always have many fond memories of the aircraft."