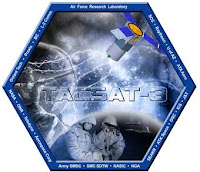 KIRTLAND AIR FORCE BASE, N.M. (AFMCNS) — Officials are delaying the launch of Tactical Satellite-3 – which was scheduled to occur later in January – until repairs to a spacecraft avionics component, critical to the system’s operational capability, are complete.

The Air Force Research Laboratory’s Space Vehicles Directorate here administers the satellite program, known as TacSat-3. The program team is working with the manufacturer to resolve the problem.

“We’re very disappointed in the delay, but the fix is necessary to assure the on-orbit performance of the satellite,” said Thom Davis, TacSat-3 program manager. “Had we not discovered and corrected this problem, we would have had a potential catastrophic mission failure.”

The satellite originated five years ago to address military requirements for responsible, flexible, and affordable spacecraft operating in the cosmos. It consists of three pioneering experiments: the Raytheon Company-constructed Advanced Responsive Tactically Effective Military Imaging Spectrometer hyperspectral imager; the Office of Naval Research’s Satellite Communications Package; and AFRL’s Space Avionics Experiment. The trio of payloads will offer real-time imagery (within 10 minutes of collection), sea-based information transmitted from ocean buoys and plug-and-play avionics to support the warfighter in keeping one step ahead of the adversary.