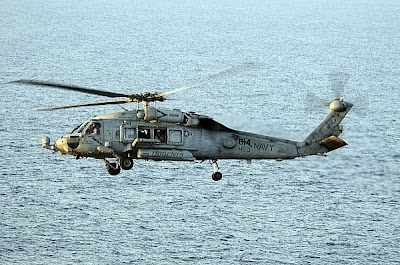 An HH-60H Sea Hawk helicopter attached to the "Tridents" of Helicopter Anti-Submarine Squadron (HS) 3 soars trhough the skies around the Gulf of Aden in support of the amphibious transport dock ship USS San Antonio (LPD 17). San Antonio is the command ship for Combined Task Force (CTF) 151, which conducts counter-piracy operations in and around the Gulf of Aden, Arabian Sea, Indian Ocean and the Red Sea and was established to create a lawful maritime order and develop security in the maritime environment. (U.S. Navy photo by Mass Communication Specialist 3rd Class John K. Hamilton/Released)

HS 3's primary role in CTF 151 operations is to provide aerial support with its HH-60H and SH-60F helicopters, which specialize in combat search and rescue, mobility and logistics.

"We present a show of force when flying above any suspected pirate vessels while the boarding teams track them in the [rigid-hull inflatable boats], and we can definitely provide a rescue platform during the operation as well as a show of firepower," said Cmdr. William Cox, HS 3's executive officer.

San Antonio was chosen as the afloat forward staging base (AFSB) for HS 3 because of the ship's many capabilities. Its hangar bay can house two helicopters with plenty of space for maintenance, and its large flight deck allows the squadron to launch four helicopters at the same time if needed.

HS 3 brought everything they needed for sustainment during the mission, such as parts for the helicopters and optimal manning in logistics.

"We had to decide how many of our Sailors we could bring over to San Antonio from Theodore Roosevelt without taking away all the quality of work we provide on the carrier," added Cox.

"We've never worked with the Marine Corps and Coast Guard, and it's exciting to be in this atmosphere of working with the international community on San Antonio's first deployment," said Cox.

"My Sailors are great people who do a great job for me every day, and we're just happy to be a part of this event."

San Antonio's Air Department provides HS 3 with the manpower it needs to carry out the various CTF 151 operations.

"We provide safe ground support for the aircraft with directing, landing and refueling," said Senior Chief Aviation Boatswain's Mate (Handling) Richard Romious, the air department's leading chief petty officer. "Our handlers make sure the helicopters are chocked and chained to the hangar or flight deck, and our fuels personnel provide quality assurance through our refueling their craft."

San Antonio's crew spent weeks making the necessary changes and configurations to prepare the ship for its current mission. These changes allowed several spaces to be available for use by the various embarked units, including HS 3.

"We have configured several of the ship's spaces so that the equipment and resources available are tailored to the specific missions that the CTF 151 staff, along with the help of San Antonio's personnel, will be planning and executing," said Lt. Cmdr. Sean Kearns, San Antonio's executive officer.

Although three helicopters from the squadron are currently part of CTF 151, the rest of the squadron is still aboard the aircraft carrier supporting maritime security operations and Operation Enduring Freedom in the North Arabian Sea.

San Antonio is the flagship for Combined Task Force (CTF) 151. CTF 151 is a multinational task force conducting counter-piracy operations in and around the Gulf of Aden, Arabian Sea, Indian Ocean and Red Sea. It was established to create a lawful maritime order and develop security in the maritime environment.
at 1/24/2009 09:08:00 AM