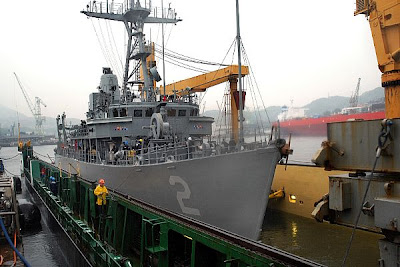 The mine warfare ship USS Defender (MCM 2) enters the submerged deck of the Military Sealift Command heavy-lift vessel Condock IV during a float-on/float-off evolution in Sasebo basin. Defender will be joined in Sasebo by USS Avenger (MCM 1), expected to arrive later in the month. Both avenger-class mine warfare ships will conduct an extended deployment in the western Pacific Ocean. (U.S. Navy photo by Mass Communication Specialist 2nd Class Joshua J. Wahl/Released)

The Navy does not possess the capability provided by the specialized heavy-lift ships, also known as semisubmersible ships.

"We have done heavy lift ship movement before, but this is the first time we have done this evolution here in Sasebo. For the local representatives it is a great experience we are all excited to be a part of," said Ray.

Defender, the first of two mine ships that will conduct a Western Pacific (WESTPAC) deployment, arrived ahead of the lead ship of the Avenger-class mine ships, USS Avenger (MCM 1), expected to arrive toward the end of June.

Both ships recently shifted their homeport from Ingleside, Texas, to San Diego, where they conducted pre-overseas movement training and a maintenance period dedicated to elevating readiness and support of the Sailors and the WESTPAC deployment.

Ensign Christopher B. Cupp from Sulphr, La., said the transit from Ingleside took approximately 45 days with six crew members riding aboard to keep watch and provide general maintenance to the ship while conducting the transit.

"Being a smaller ship, our design is tailored for the coastal mission and can only maintain stores and supplies long enough for a shorter time," said Cupp.

"This has been a terrific opportunity to get more experience and see how the Navy operates in other areas of the world. I have heard so many good things about Sasebo, and Japan is someplace I have always wanted to visit. I am really looking forward to getting out and exploring the rich culture while we are here."
at 6/06/2009 07:07:00 AM