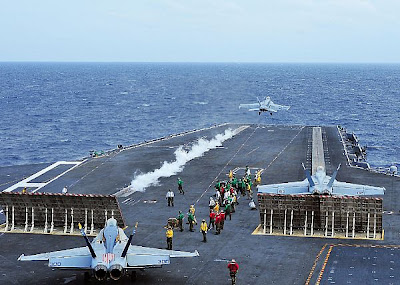 The COE certification, sometimes called a "blue-water certification," allows the ship and airwing team to launch and recover aircraft without the requirement for a divert airfield if operationally necessary.

"The Airwing 5, George Washington team came together to complete this evaluation better and sooner than anyone expected following our extended maintenance period," said GW Commanding Officer Capt. David A Lausman. "That success is truly a testament to the hard work and professionalism of all of the 5,000 Sailors on board, from the aircraft directors on the flight deck to the helmsmen steering the ship and from the maintainers keeping our aircraft flying to the culinary specialists preparing our food in our galleys.

"That teamwork is what makes us America's 911 strike group, fully ready to go anywhere in the world to execute the orders of the president of the United States."

The certification process began May 23, with the evaluation phase beginning May 31, according to GW Air Officer Cmdr. Mark Stoops. The GW/CVW-5 team was required to meet established criteria of efficiency and safety during aircraft launch and recovery operations throughout two consecutive days.

"We did very well in both of those areas, which are hard to meet," Stoops said. "It's a big hurdle — a fun hurdle to face and a good hurdle to get over."

Cmdr. Steve Blasch, GW's assistant air officer, pointed out that the safe and efficient launch and recovery of aircraft requires teamwork at every level.

"The guys on the deck are phenomenal, and the work they do on a daily basis is amazing," he said. "But you can't overlook all the other Sailors, from those in the superstructure navigating the ship to the engineers below decks making us steam and getting wind over the deck."

The qualification is the last test for GW and CVW-5 before their upcoming deployment.

"This initial qualification gets us started as we begin our exercises through the summer on deployment," said CVW-5 Commander, Capt. Michael S. White.

"The real element we've been working for is to build the CVW-5 and GW team," White said. "The good part is everyone is very professional. They know what they're doing in their jobs, and it's just a matter of building communication lines so we work better together."

Following COE, GW will continue this underway in the western Pacific Ocean conducting advanced cyclic flight operations in preparation for its first summer deployment from Fleet Activities Yokosuka since becoming the Navy's only permanently forward deployed aircraft carrier.
at 6/04/2009 06:57:00 AM