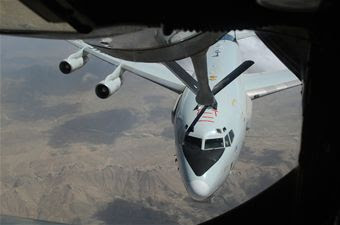 SOUTHWEST ASIA (AFNS) -- In some form or fashion, every Airman deployed to the U.S. Central Command area of responsibility feels the effects of round-the-clock air operations, but perhaps none are more in tune with it than those working at the 340th Expeditionary Air Refueling Squadron in Southwest Asia.

"Right now, there are more than 30 airplanes and almost 50 crews performing aerial refueling missions for (Operations Iraqi and Enduring Freedom)," said Lt. Col. Michael Frymire, the 340th EARS commander. "Obviously, we're 24/7/365, and all that we accomplish, with what little we have, keeps things here very interesting."

"Using my own paradigm from other flying squadrons, the amount of infrastructure we have here, based on the size of the operation, it's pretty amazing we're able to sustain it," Colonel Frymire said.

"We have an interesting dynamic," he said. "We're total force -- completely 'rainbowed' between active-duty, guard and Reserve members. There aren't too many flying organizations that do that."

Because of this dynamic, the squadron experiences frequent member turnover.

"There are about 15 different units here at any given time, and we have weekly deployment and redeployment -- crews coming in, crews going out -- and we do that continuously," the colonel said.

"A lot of times it gets absolutely crazy over here," Colonel Frymire said, "and most of our folks work seven days a week. I try not to kill them with 12-hour shifts, but there's a definite burn-out factor. It's tough on them, because things never stabilize."

"Our AMU is amazing," Colonel Frymire said. "We can't get off the ground without their support."

Capt. Clarence Lovejoy, the 340th EARS assistant director of operations, one of the many behind-the-scenes Airmen whose dedication and expertise helps make refueling happen throughout the area of responsibility, tackles the daily task of flight scheduling.

After deciphering air tasking orders from the Combined Air Operations Center and extracting the points most pertinent to the aircrews, he builds their daily flight plans and tracks every flight hour for the nearly 50 crews.

"We keep up a pretty good pace," Captain Lovejoy said. "We do a lot of planning, but it's basically the crews that handle the workload. They're flying long sorties.

"Our crews often will push their monthly flying hour limits, so we have to sit them down for a few days," he explained. "And on top of flying hours, we have to keep them on a circadian rhythm, which is probably the biggest challenge."

Another challenge is fitting the right crew with the right aircraft, Colonel Frymire said.

"Not every crew here can fly every configuration of the airplane," he said. "Our jets are subtly different. The (multi-point refueling system) pods on the sides require special aircrew certifications.

"Our alert requirement every day is typically an MPRS tail, because we can do either boom or drogue, which means we can refuel the Navy or the Air Force," he said.

Daily and alert missions aren't all the squadron flies.

Regardless of the type of mission the 340th EARS flies, there's one thing they all have in common: refueling other aircraft in the sky above the AOR. This responsibility rests on the one enlisted aircrew member on board -- the boom operator.

From a prone position in the tail area of the KC-135, the boom operator views the receiving aircraft, positions the boom apparatus to connect with the receiver, and provides it with the fuel needed to complete its mission.

"This is some of the best flying," said Tech Sgt. Jeff Stoermer, a 340th EARS boom operator. "In 60 days here, we do what it takes a year to do at home station."

In addition to operating the boom, his position entails several other responsibilities.

"I'm the third set of eyes, after the pilot and co-pilot," Sergeant Stoermer said. "I also do loadmaster and flight engineer functions, kind of a jack-of-all-trades on board the aircraft."

Colonel Frymire said he's most impressed with how all of the Airmen in his squadron perform so well at a mission that is ever-increasing in its demand on them.

"The volume of work all these folks do is just unbelievable," he said. "We've been here doing this refueling mission for awhile, and we make small changes and continuous process improvements over time.