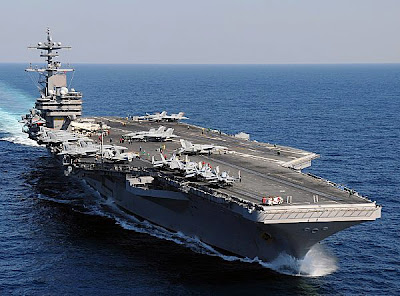 Blog Editor Note: To my friends down in Florida you should see these guys show up for ops sometime between 26 to 29 November. We hope to have Milcom blog logs and intercepts of this COMPUTEX event here on the Milcom MP Blog.

COMPTUEX is a series of training exercises designed to certify the carrier strike group deployment-ready by testing its ability to react to real-world scenarios and perform as an integral unit.

Commander, Strike Force Training Atlantic (CSFTL) is evaluating CSG2 on how they perform during simulated surface and sub-surface threats and ship movements such as transiting a strait in hostile waters.

"CSFTL will evaluate our ability to perform all the different mission sets," said Cmdr. Andrew Walton, the Operations officer of USS George H.W. Bush (CVN 77). "This includes everything from counter-piracy to maritime interdiction operations and strike warfare."

Throughout COMPTUEX, fictitious geopolitical scenarios are used to replicate real-world circumstances that could be encountered during deployment.

"We immerse ourselves in this synthetic world from the second we pull lines over and get underway," said Cmdr. Walton. "This acts as a representation of what we'll see throughout our deployment, such as failed states, acts of piracy, and counter-terrorism operations. We expect that throughout the event, there'll be airborne, surface and even sub-surface forces out there that will be testing us."

CSG 2 combines George H.W. Bush, Carrier Air Wing (CVW) 8, and Destroyer Squadron (DESRON) 22 during the exercise. All ships and their crews and the embarked air wing will play a vital role

"Our role during this COMPTUEX will be similar to previous underways," said Lt. j.g. Jared Good, a pilot in Helicopter Sea Combat Squadron (HSC) 9. "We will continue to provide support foraAnti-terrorism force protection, and such things as vertical replenishment and man-overboard drills."

CSG 2 is conducting its final pre-deployment evaluation to ensure safe and effective coordination with the strike group to achieve mission readiness and the ability to work alongside international allies in the execution of the Navy's maritime strategy.