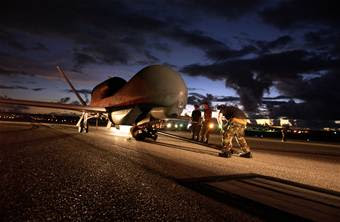 A flightline ground crew secures the Global Hawk for towing to a secure hangar July 19 at Andersen Air Force Base, Guam. The aircraft has a wing span of 116 feet and is designed to cruise at extremely high altitudes. This marked the first time a Global Hawk deployed in support from the 9th Reconnaissance Wing at Beale Air Force Base, Calif. (U.S. Air Force photo/Senior Airman Miranda Moorer)

Previous Global Hawk deployments were flown out of Edwards AFB, Calif., with a combined effort from pilots of both Edwards and Beale Air Force bases.

The flight also marks the first Global Hawk landing at Andersen AFB, where the Global Hawk is scheduled to be stationed permanently starting in 2009.

The deployment symbolically represents the first step in stabilizing unmanned aircraft in national and international air space, base officials said. This operational mission required Beale AFB Airmen to set up the launch and recovery element, and all additional infrastructures to receive the aircraft at Andersen AFB.

"We have stabilized our training operations at Beale and are now stepping out to show that we can safely self-deploy the Global Hawk around the world," said Lt. Col. J. Scott Winstead, the 12th Reconnaissance Squadron commander.

To make the long trip and land safely, many obstacles had to be overcome by maintenance and operations members.

"The primary challenge from the operations side was software and weather," Colonel Winstead said. "We had to delay the initial deployment a week to allow a typhoon to move through the Guam area, and the software used to fly the Global Hawk is new and requires different training for the pilots."

To overcome these obstacles, a massive training effort was launched by the 12th and 18th Reconnaissance Squadrons from Beale AFB. With the operations side addressed, maintenance professionals were facing their own equally demanding obstacles.

Maintenance crews at Beale AFB had to focus on efficient trouble-shooting and problem correction to launch the aircraft in a 45-minute window.

"We were dealing with so many firsts," said Maj. Alan Rabb, the 18th Reconnaissance Squadron chief of current operations and en route team commander. "Our first hurdle was to get (to Andersen) and get set up, which alone, proved to be a bit of a challenge."

Once they arrived at Andersen AFB, the en route team of Beale AFB maintainers set up the launch and recovery element, initiating satellite connectivity, performing link checks and trouble-shooting possible risks; all necessary to receive the Global Hawk.

"Maintenance leadership is extremely proud of every maintainer whose hard work and teamwork really made this operational mission happen," Colonel Clifton said.

This mission demonstrated the tremendous range and capabilities the Global Hawk brings to the fight.

"This deployment really shows the incredible global reach of the aircraft as the 16-hour leg from Beale to Guam was only slightly over half of the 30-hour capability," Colonel Winstead said.

"The lessons learned here are critical to the future deployment capability of the Global Hawk," said Col. Jon Engle, the 9th Operations Group commander.
at 7/30/2007 07:45:00 AM