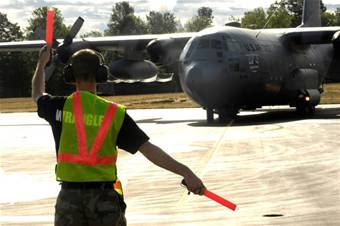 MCCHORD AIR FORCE BASE, Wash. (AFPN) -- On a gray Pacific Northwest morning in the middle of July, McChord Air Force Base resembled a European airfield at the height of the Berlin Airlift.

While the operations tempo for McChord AFB has been high for the last several years, the influx of aircraft here for the 2007 Air Mobility Command Rodeo dwarfs the normal pace.

"As far as an Air Force base goes, nothing comes close to this," said Lt. Col. Scott Lavigne, the head operations planner for the competition.

Nearly 50 airlift and tanker aircraft touched down at a rate of one every five minutes for more than four hours July 21 as American teams joined international competitors for Rodeo 2007.

Managing the aircraft arrivals as well as the flying operations during the week of competition is a monumental feat of planning and logistics. First, the C-17 Globemaster IIIs stationed at McChord AFB were assigned missions outside the local area, so there would be room on the flightline. International competitors arrived in mid July for orientation to the Pacific Northwest airspace. Then months of planning came together when a McChord AFB 62nd Airlift Wing aircrew arrived at 8 a.m. July 21 as the first of 44 American teams arrived.

A group of seven logisticians from Scott AFB joined McChord planners to coordinate the effort. The same team will help coordinate 147 missions during competition week, which runs through July 27.

"There are 50-plus teams flying missions every day, 24/7," Colonel Lavigne said. "We're the nexus of all the coordination for both the flying and ground portions of the competition. The secret is getting lots of smart captains working for you."

At Rodeo 2007, teams from all over the world compete in events to see who has the best combat airlift capabilities. Nearly every aspect of flying and support is tested. Aircrews are put through a litany of tests -- including a low-level airdrop -- to see who is best of the best. Keeping everything running with clock-like precision is the job of Colonel Lavigne and the rest of his team. There is no leeway built into the scoring system for an error made by the planners.

"Since everything relies on the previous time, it can create a snowball affect," Colonel Lavigne said.

The competition extends past the gates of McChord AFB. Civilian airports -- Seattle Tacoma International Airport being the largest -- sharing airspace with the competition also have to coordinate flights around Rodeo. Months ago, a McChord AFB member began coordinating flight planning with the various agencies involved.

"There's a tremendous amount of communication with the Federal Aviation Administration and area airports," Colonel Lavigne said. "They need to know the rules of our competition so they don't delay our competitors' flight times and get them 'dinged' on points."

Tracking such a unique mission requires specially designed software, created specifically for Rodeo 2007. Since the system AMC officials use to track tactical missions is geared strictly toward tracking air operations, a new one had to be developed to cover both the ground and air events that happen at the airlift competition.

At the 2005 Rodeo, Lt. Col. Mike Mattinson, a Rodeo coordinator, decided it was time to develop a system specifically for the competition. A C-17 Globemaster III instructor pilot by trade, Colonel Mattinson said he has spent the better part of the last 10 years tinkering with his office software, teaching himself a bit of programming along the way. As a result, he has become a point-man for the command's senior leadership when it comes to figuring out office technology.

For this year's competition, Colonel Mattinson crafted new software from scratch. New features, such as a "rainbow" summary that gives coordinators an effective visual of all assets, missions and flight times are included.

"It's a good system. There's a lot of versatility," said Capt. Lisa Pierce, one of the people Colonel Lavigne recruited to be part of his team.

The fact that Captain Pierce has no complaints bodes well for her. For the duration of the week-long competition, Captain Pierce and her fellow planners will spend at least 12 hours per day working to keep the sky and ground organized.
at 7/26/2007 07:06:00 AM