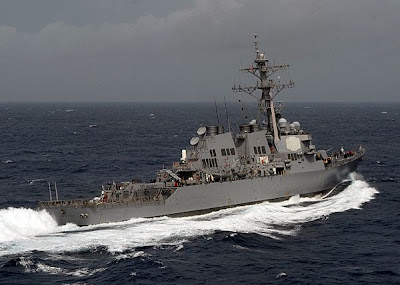 The Iwo Jima Expeditionary Strike Group (ESG) is underway in the Navy's 5th and 6th fleet area of operations with new technology added to its arsenal. The guided-missile destroyer USS Ramage (DDG 61), part of the Iwo Jima ESG, is the first East Coast ship equipped with a Ballistic Missile Defense (BMD) system.

The new BMD system not only allows the strike group to defend themselves against missile attacks, but other areas as well.

"This contributes greatly to the ESG operations," said Cmdr. Peter Galluch, Ramage's commanding officer. "It gives our ESG commander and theater commander another capability that's never been deployed from the East Coast. We can detect and identify, track and engage short-range and medium-range ballistic missiles. So whatever theater we go in, we can defend population centers, or assets from attacks from aggressive nations with ballistic missiles. That's never been the case before."

Although there are numerous DDG's homeported on the East Coast, Ramage was specifically selected to be the first to receive the BMD system.

"Ramage, with our base-line Aegis load, makes us eligible to have the BMD software," said Lt. Cmdr. Harry Marsh, Ramage's Combat Systems officer. "With our timeline, the timing of our yard period, and when our deployment was scheduled, we were in the right place at the right time. Our crew has proven that it was also the right ship, we've met all of the requirements and expect to continue to do so."

A vast amount of time was spent in training Ramage's Sailors on the operation of the BMD system.

"The crew underwent very intensive training," said Galluch. "Their rates got them in the ballpark; working on Aegis, working in the combat information center, and their 'A schools' had a lot of it, but then they had a month of specific technical & tactical training on the system."

"After the certification we've been running scenarios and drills and technical training to keep up the proficiency and build our operational excellence," Galluch continued. "The Ramage has a great reputation, so they knew what ship to put it on."