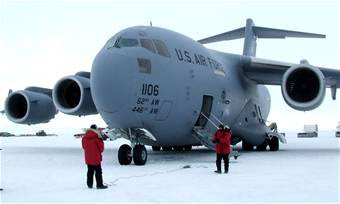 Operation Deep Freeze, the U.S. military's support of the U.S. Antarctic Program and the National Science Foundation, kicked off the 2008-2009 season on Sept. 4 as the first C-17 Globemaster III delivers passengers and cargo to McMurdo Station, Antarctica.

The C-17, based out of McChord Air Force Base, Washington, will fly multiple missions from Christchurch International Airport, New Zealand, to McMurdo Station as part of SpringFly Sept. 4-10. Christchurch is the staging point for deployment to McMurdo Station, a key research and operations facility for the U.S. Antarctic Program.

Formerly known as WinFly, SpringFly is the ODF ramp-up phase to prepare buildings and equipment, as well as pave the overland traverse to the South Pole, in preparation for the arrival of the main body of military and civilian personnel during the main season in October.

Antarctica is the coldest, windiest and most inhospitable continent on the globe. The U.S. military are uniquely equipped and trained to operate in such an austere environment and has therefore provided support to the U.S. Antarctic Program since 1955.

Callsigns
Mac Ops -- Field Operation Communications Center, second floor of Bldg 165 at McMurdo. Air National Guard LC-130 aircraft are identified by the call sign “Skier,” followed by a specific aircraft number.Helicopters are identified by the last three digits on the helicopter tail. The digits are always two numbers and a letter.
at 9/08/2008 09:46:00 AM