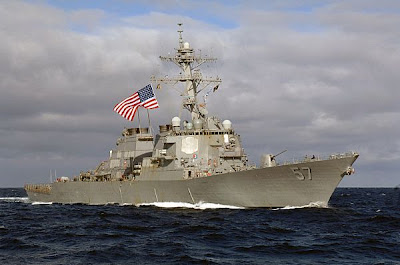 USS MITSCHER, At Sea (NNS) -- Sailors aboard the guided-missile destroyer USS Mitscher (DDG 57) are using the remaining days of September to hone their skills in damage control as the ship transits the Atlantic Ocean to participate in the Joint Warrior course, a multinational exercise held off the coast of Scotland.

With drills and exercises conducted daily, Sailors assigned to Mitscher's damage control division said their transit across the Atlantic gives them a chance to get back to the basics and ensure damage control teams are proficient in their levels of knowledge.

"Right now we are conducting daily drills for the at-sea fire party," said Damage Controlman 2nd Class (SW) Frank Sampsel, a member of the ship's damage control division. "We are also holding training for the repair lockers, hose handling, flooding and the P-100 submersible pump. The goal is to ensure that all damage control kits go through extensive training."

Damage Controlman 1st Class (SW) Kevin Parham emphasized the importance of having every crew member qualified in a diverse cross-section of damage control and ready for potential shipboard emergencies.

"It is vital for the entire crew to be competent in damage control," said Parham. "With our smaller crew compliment, and the fact that this is a warship, the survival of the ship during an emergency rests on the quality of the training the crew receives."

"Having the entire crew trained in damage control helps to better the ship," said Sampsel. "Familiarization with damage control equipment and firefighting ensures that we are capable of handling any emergency that comes our way."

Joint Warrior will begin in early October and is expected to last approximately two weeks. The exercise will involve air, sea, and ground assets from participating allied and NATO forces.
at 9/26/2008 08:19:00 AM