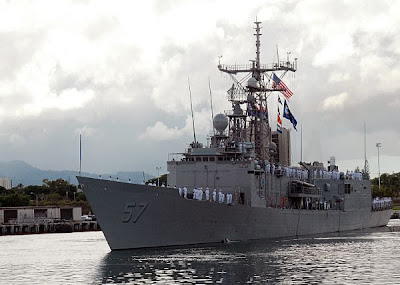 The Mid-Pacific Surface Combatant Operational Employment program calls for nine of the 11 Hawaii-based surface combatants to conduct intermediate/advanced training and regular deployments in the Western Pacific, and is designed to improve the U.S. Pacific Fleet's war fighting readiness and effectiveness.

Friends and family watched from the pier as their loved ones set sail for the Pacific Ocean.

"It's what they're here to do," said the spouse of an O'Kane Sailor. "The best we can hope for is they come back to us safely."

"We're absolutely ready to do this," said Cmdr. Joseph Naman, commanding officer of Reuben James. "We've spent a lot of time underway recently and are trained in all areas, so this is nothing new to the crew."

Reuben James and O'Kane returned June 8 from a two-month deployment as part of the USS Nimitz (CVN 68) Carrier Strike Group (CSG) in support of the global war on terrorism.

Departing their friends and family after a short period of time can be strenuous, but the Sailors are ready for the challenges that are to come.

"It's going to be another great experience," said Boatswain's Mate 2nd Class (SW/AW) Adan Ramos, assigned to O'Kane. "We're all confident and ready to do everything we're tasked to do."