NASA to use Lackland as stopover 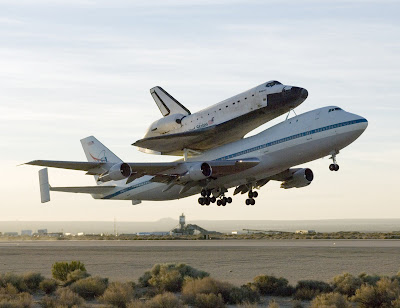 LACKLAND AIR FORCE BASE, Texas (AFNS) -- Lackland Air Force Base officials will support the NASA space program by allowing the space shuttle to stopover here while on its ferry ride home if the shuttle does not land at Kennedy Space Center, Florida.

Before Kelly AFB in San Antonio closed in 2001, the airfield was the most frequent stop in a transport route as the shuttle was ferried atop a Boeing 747 from Edwards AFB, Calif., to its Florida home.

Support of the program at what was then Kelly AFB, which is adjacent to Lackland AFB, was dropped in October 2000.

"Of all the ferry stops in the U.S., this is the one that has been used the most," said Al Zipprich, the 37th Operations Support Squadron director of operations. "During base realignment, Kelly stopped supporting the missions because of the uncertainty about its closing."

Mr. Zipprich said Lackland AFB could be upgraded as an alternate landing site as early as October. Lackland AFB officials already received the necessary training for the upgrade.

Lt. Col. Tony Lombardi, the Human Space Flight Support chief, Houston, led the Lackland AFB training and also conducted a survey of the airfield, another requirement for the landing upgrade.

"There are a few things we have to make sure we have available, so we're working on that now," Mr. Zipprich said. "We also had previous runway construction planned, but we should be ready by late October."

On its most recent ferrying trek in June, severe thunderstorms altered the shuttle's original route to Amarillo, Texas, forcing NASA to redirect the flight and land the piggybacked 747 at Lackland AFB for refueling.

Lackland AFB officials were able to accommodate the stopover with only a few hours notice. Word spread quickly through San Antonio of the landing and impending takeoff. Hundreds of curious sightseers jammed medians and shoulders along Highway 90 and Military Drive around Kelly Field to catch a glimpse of the aircraft not seen in this area for nearly a decade.

The shuttle ferrying system is an expensive option for NASA. Costs can run close to $2 million per trip.

"Team Lackland's ability to recover the ferry flight in June saved the shuttle from being on the road for almost an additional week," Mr. Zipprich said. "It would be NASA's preference if they didn't have to ferry because of the expense."

Seven more shuttle missions are funded through fiscal 2010. Past experience suggests one of every four missions involves piggybacking the shuttle cross-country to its Florida home.