"I can tell the crew of the USS Jason Dunham, that you can not have a better namesake, nor a better sponsor. This ship, USS Jason Dunham, will always remind individuals that freedom is in fact not free. It is paid for by those great young men and women who wear the cloth of our nation," said retired general and former commandant of the Marine Corps Michael Hagee, who served as guest speaker.

Deborah Dunham served as the sponsor of the ship named for her late son. In accordance with Navy tradition, she broke a bottle of champagne across the ship's bow and christened the ship.

She said her son would be very proud of the honor to have a ship named after him.

"It's an honor to be able to do this for Jason. I appreciate the fact that they chose to name the ship after Jason, but I like the idea that they'll be able to carry his name on in history. I'm hoping that somebody, a child in school some day, will see the name 'Jason Dunham' and look it up and find out what he did with his citation. Maybe, that will encourage them to go to the Medal of Honor Society Web site and find out what other men have done for our nation, also.

"These men carry on their heroic actions very quietly and very humbly. So, if this is a way of putting it out there, of what this whole entire fraternity of men have done for our country, I'm glad that he could be a stepping stone for that," said Dunham.

The new destroyer honors the late Cpl. Jason Dunham, the first Marine awarded the Medal of Honor for his actions during Operation Iraqi Freedom. On April 14, 2004, Dunham's squad was conducting a reconnaissance mission in Karabilah, Iraq, when his battalion commander's convoy was ambushed. When Dunham's squad approached to provide fire support, an Iraqi insurgent leapt out of a vehicle and attacked Dunham. As Dunham wrestled the insurgent to the ground, he noticed that the enemy fighter had a grenade in his hand.

Dunham immediately alerted his fellow Marines, and when the enemy dropped the live grenade, Dunham took off his Kevlar helmet, covered the grenade, and threw himself on top to smother the blast. In an ultimately selfless act of courage, in which he was mortally wounded, he saved the lives of two fellow Marines.

In November 2006, at the dedication of the National Museum of the Marine Corps in Quantico, Va., then-President George W. Bush announced that the Medal of Honor would be awarded posthumously to Marine Cpl. Jason Dunham.

During his speech, Bush said, "As long as we have Marines like Cpl. Dunham, America will never fear for her liberty."

Bush presented Cpl. Dunham's family with the Medal of Honor during a ceremony in the East Room of the White House on Jan. 11.

"Today, Jason takes his rightful place in naval history alongside his storied legacy in the annals of the Marine Corps," said Secretary of the Navy, Ray Mabus.

"Though Jason is no longer with us, his name will live on in this magnificent warship that represents the best our nation has to offer. Jason's spirit -- as a warrior, fighter, and one who never gave up, even in the face of great challenges -- lives on to lead all of the men and women who will ever serve aboard USS Jason Dunham, in home waters and abroad. In the fighting spirit of its namesake, the men and women of USS Jason Dunham will never back down from any challenge put before them," said Mabus.

"It's clear that having 'Jason Dunham' written on the stern of this ship will always force the crew to think about why they're serving and what they're giving and what they expect of themselves. So, what Jason taught the rest of us is something that they can always think about as they serve on that ship, wherever it may take them," said Michael M. Phillips, author of "The Gift of Valor: A War Story," a book about Cpl. Dunham and actions leading up to his Medal of Honor.

The ship's prospective commanding officer is Cmdr. Scott Sciretta who will lead the crew of 276 officers and enlisted personnel of the 9,200-ton vessel.

"This is the greatest honor of my life. I cannot stress with anything greater in my heart anything that I feel, to have the opportunity to meet Dan and Deb Dunham and their lovely family, the sacrifice that Jason made for this country, the sacrifice that Dan and Deb continue to make for this country on a daily basis. I'm deeply honored," continued Sciretta.

In the spirit of this Marine, USS Jason Dunham will continue protecting America's liberty by providing a dynamic multimission platform to lead the Navy into the future. Utilizing a gas-turbine propulsion system, the ship can operate independently or as part of carrier strike groups, surface action groups, amphibious ready groups, and underway replenishment groups. The ship's combat systems center on the Aegis combat system and the SPY-Ld(V) multifunction phased array radar. With the combination of Aegis, the vertical launching system, an advanced anti-submarine warfare system, advanced anti-aircraft missiles and Tomahawk cruise missiles, the Arleigh Burke-class continues the revolution at sea.

"I feel incredibly honored to be here today to christen the USS Jason Dunham," said Mabus. "To honor a Marine who made the ultimate sacrifice, so that others Marines could live and so that America could continue to represent the values that we do. To have a Navy ship named after such a Marine is in the great tradition of our naval forces. And USS Jason Dunham is going to represent us well, around the world, in a lot of different capacities, for decades to come.

"This is one of the most capable ships that the Navy has. It's one of the most capable types of ships that any navy has ever had. It can mount simultaneous defenses and attacks. Air, sea, underwater. It is truly an integrated fighting machine. And it's got other things too. It can deliver humanitarian aid. It can deter some aggression. It can reassure allies. It is an incredibly capable ship, in an incredibly capable navy, in an incredibly complex world. And it's something that we need, and it's something that's going to serve us well.

"It shows what values we have in the United States. Not only in the Navy and Marine Corps, but as a country. The values of character, of honor, of sacrifice, of the willingness to give to something bigger than ourselves. And I think that the name Jason Dunham on this ship, what he stood for, the character that he had, the actions that he took, will represent us well as this ship sails in our fleet for a long time to come," said Mabus.

"He would think it was an absolute hoot, and he would just enjoy it to no end. I do think Jason would find it a huge honor," said Dunham's mother.

"It would be our duty and pleasure to be with the ship and be a part of the ship for the rest of the ship's life or my life and the children's lives, and I'm really looking forward to a family cruise," said Dunham. 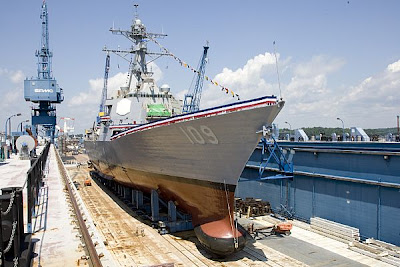 The Arleigh Burke-class guided-missile destroyer Jason Dunham (DDG 109) is translated from the Land Level Transfer Facility at Bath Iron Works into the floating dry dock after its christening ceremony in preparation for float-off later in the day. (Photo courtesy Michael C. Nutter/ General Dynamics/Released)
at 8/02/2009 07:44:00 AM