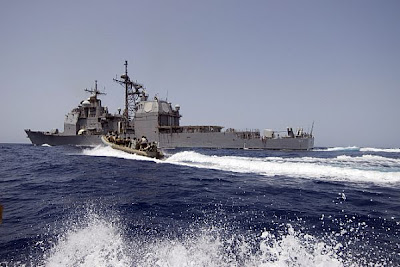 Gettysburg returned home after a six-month deployment with the Dwight D. Eisenhower Carrier Strike Group in support of operations in the Gulf of Aden, Persian Gulf and as part of Operation Enduring Freedom.

"We had a very successful deployment; we served 103 days under Combined Task Force 151 conducting counterpiracy operations in the Gulf of Aden and the Somali basin," said Capt. Richard A. Brown, commanding officer, USS Gettysburg. "The crew performed absolutely superbly; we captured 38 suspected pirates, the first ever [pirate] mother ship and returned 17 of those suspected pirates over to Kenya for prosecution."

While deployed, Gettysburg not only participated in counterpiracy operations and stopped a pirate attack in progress, but they also marked another milestone.

"It was a[n] historic event," said Brown "What it really did was solidify the ties between the Turkish Navy and the United States Navy, and we absolutely enjoyed having him and his staff on board."

During CTF 151's three months aboard, counterpiracy operations in the Gulf of Aden and Somali Basin were highly successful.

Now that the Gettysburg has returned, Brown said the first priority is for his Sailors to reunite with their families and get some well-earned rest.
at 8/01/2009 07:37:00 AM