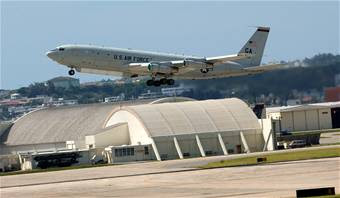 Aviation Week in a story on their online copyrighted aerospace daily and defense report, indicates that the USAF JStars program may be on the budget chopping block.

From the story written by David A. Fulghum and Amy Butler,

"The return of the U.S. Congress next month will reignite smoldering defense budget battles, and one new target of the budgeter’s ax could be upgrade packages for the E-8C Joint Surveillance Target Attack Radar System (JSTARS).

"The ground surveillance aircraft is slated to start flying out of Afghanistan next summer in response to an urgent need request for a dynamically-tasked, real-time airborne surveillance system that can track people in rough terrain.

"Despite the advantages of the improvement package, as the Air Force continues reconsidering its strategy for collecting ground surveillance, the fate of JSTARS has become uncertain, according to industry and government sources. Defense Secretary Robert Gates has not hesitated to cancel or shelve problematic programs or question others on their purported benefits in light of strict budget conditions and changing military needs.

"The JSTARS fleet was based on preowned 707 aircraft, some of which had bad corrosion problems. As a result, Air Force officials are weighing the value of extending the life of JSTARS against the cost of introducing a new platform. A decision on which model aircraft — likely a Boeing 767 or Airbus A330 — to purchase for a future USAF refueling tanker could provide an alternative vehicle for a next-generation GMTI collector, as well as signals and communications intelligence collection."