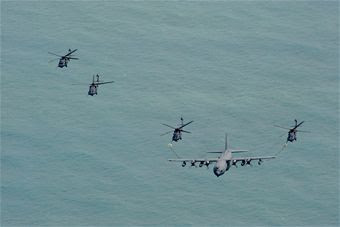 The mission simulated a mass hurricane evacuation prior to the start of Florida's storm season, as well as the 920th RQW's busy deployment schedules.

Airmen flew the aircraft several miles out to sea where the Kings refueled the Pave Hawks, then the fleet returned to the coastline, flew south approximately 10 miles, then turned and flew north about the same distance north along Cocoa Beach, then back to Patrick Air Force Base.

This was the first time the entire operational fleet was flown in more than 15 years and it was significant for 920th RQW Airmen for many reasons, said Col. Robert Dunn, the 920th Rescue Wing commander.

"To do something like this takes a lot of effort," Colonel Dunn said. "These are old planes; to put 100 percent of them in the air together is a major feat that required a lot of time, effort and coordination from everyone.

In addition to training for hurricane evacuation and natural disaster relief, Colonel Dunn said having the aircraft maintainers work together and see the fruits of their labor was a great morale booster for them.

"It's good practice, and it's motivational," he said. "To see the (aircraft) maintainers out there watching all the planes and helicopters take off, and seeing the pride in their faces for what they've accomplished, makes it all worth it."

The colonel said he knew this would require extensive work from all Airmen, but he believes the entire wing benefited from it.

He said it was a great success, and he was proud of the hard work his Airmen did to make it happen.

"It couldn't have been a better day," he said. "There was a lot of pride out there."

The maintainers started organizing the mission early to make sure everything would run smoothly. They began coordinating three months earlier with pilots and aircrew.

The primary mission of the 920th RQW is a combat-search-and-rescue. The unit is also tasked as the primary rescue force for NASA astronauts during lift off and local civilian search and rescue, as well as humanitarian relief.
at 3/07/2011 08:52:00 AM