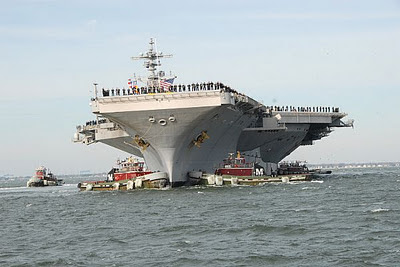 The strike group, commanded by Rear Adm. Nora Tyson, supported Operations Enduring Freedom and New Dawn along with theater and maritime security cooperation efforts in the Mediterranean and Arabian seas.

"I have been honored to serve with the men and women of the George H.W. Bush Strike Group, and I thank each and every one of them for their professionalism, their leadership and their service to their country and their fellow man," said Tyson. "They have done a remarkable job throughout this seven-month deployment, successfully meeting every tasking and every mission with total dedication."

The aircraft squadrons of CVW-8 embarked on Bush include the "Valions" of Strike Fighter Squadron (VFA) 15, The "Tomcatters" of VFA-31, the "Golden Warriors" of VFA-87, the "Fighting Black Lions" of VFA-213, the "Bear Aces" of Carrier Airborne Early Warning Squadron 124, the "Shadowhawks" of Electronic Attack Squadron 141, the "Tridents" of Helicopter Sea Combat Squadron 9, the "Spartans" of Helicopter Maritime Strike Squadron 70, and the "Rawhides" of Fleet Logistics Support Squadron 40.
at 12/11/2011 08:48:00 AM