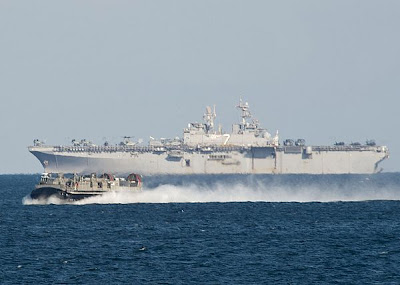 "COMPTUEX scenarios are based on an evolving storyline that is meant to expose the training audience to as many threats as they may experience in the different areas of responsibility," said Capt. Richard Frey, operations officer of Commander, Strike Force Training Atlantic. "We don't train [the readiness groups] just on where they're going to deploy, we train them to be world-wide deployable."

The common theme of "teamwork" between the Navy and Marine Corps was stressed throughout the three-week evolution.

"I feel the amphibious readiness group performed extremely well during COMPTUEX," said Capt. Thomas Chassee, commanding officer of Iwo Jima. "COMPTUEX presents an extremely complex series of missions and it takes a full Navy and Marine Corps coordinated effort in order to meet the mission. No single entity can do it by themselves.

"I believe Iwo Jima did integrate very well in both planning and execution of all assigned tasks and successfully did her part in the larger ARG effort in attaining Major Combat Operation certification requirements."

Iwo Jima operations department was able to capitalize on the exercise by blue and green air, surface and communication operations.

"The integration was there as soon as the Marines came aboard and operationally we performed well above standards," said Lt. Kyle Williams, assistant operations officer of Iwo Jima. "It helps when you have well-defined, motivated service members. It was one team, one fight from the beginning."

The teamwork spirit was also exhibited in the ship's air and deck departments, which resulted in safe and timely combat cargo movements of more than 700 personnel from ship to shore.

"The ship's force and combat cargo Marines had to execute a landing plan down to the minute and coordinated between air and surface, not only with our ship but with the other ships in the readiness group with precision," said Marine Chief Warrant Officer Thomas Desiderio, Iwo Jima combat cargo officer. "Our blue-green group has the tools and training to execute and carry out any mission, so [COMPTUEX] went well and we hit all of our marks."

With COMPTUEX completed, the Iwo Jima ARG will move on to the next and final qualification phase, certification exercise, prior to deploying in Spring 2012.
at 12/22/2011 07:29:00 AM