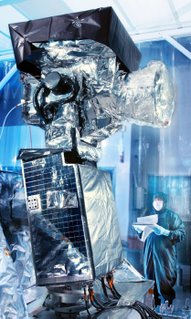 Blog Editors Note: Based on the facts in hand I believe that the SBIRS HEO payload described below was carried on the USA 184/NROL-22 satellite launched 6/28/2006 as a secondary payload. Jonathan McDowell in his JSR 567 says the primary payload is a Jumpseat SIGINT. Av Week says the primary payload says it is a SDS relay bird. At this point I do not see any compelling evidence for either of the two missions, however, based on possible length of mission and on-orbit payloads, I tend to lean towards Jonathan's pri payload theory.

Ted Molczan passed along the following elset on the SEESAT-L newsgroup:

The SBIRS Wing at the Space and Missile Systems Center (SMC), Los Angeles AFB, Calif., is developing and acquiring the system, and the 460th Space Wing, headquartered at Buckley AFB, Colo., will operate SBIRS.

General Kevin Chilton, Commander, Air Force Space Command, said, "SBIRS presents a new era of global surveillance with the ability to detect and report events that were previously beyond our capabilities, providing greatly improved support to our combatant commanders."

The SBIRS team, composed of personnel from the Air Force as well as Lockheed Martin, the prime contractor, and Northrop Grumman, the payload developer, confirmed the deployment, checkout, and testing of the HEO payload, focusing on calibration of the infrared sensors as well as line-of-sight testing. Performance is meeting or exceeding all specified mission requirements. The payload will be fully operationally certified by summer of 2008.

"Launch and checkout of the first SBIRS HEO system is a critical step in demonstrating this important new operational capability," Lt. Gen. Michael Hamel, SMC commander, said. "SBIRS will deliver revolutionary new ways to address some of the most serious threats the nation faces." 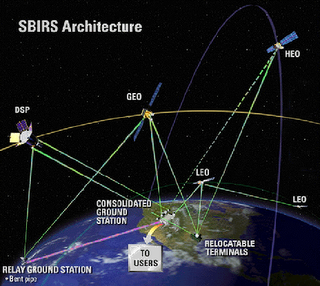 When fully operational, SBIRS High will comprise of two payloads in highly elliptical orbit (HEO), four satellites in geosynchronous orbit (GEO), as well as fixed and mobile ground-based assets to receive and process the infrared data.

SBIRS High is already providing the nation with enhanced worldwide missile detection and tracking capabilities, battlefield data, and technical intelligence through its ground segment. The first phase of the program, declared operational in 2001, consolidated ground functions of four remote sites into one centralized ground station. In addition to processing missile-warning data from Defense Support Program (DSP) satellites currently on orbit and managing the DSP constellation, the SBIRS ground station is credited with delivering significant operations and maintenance savings for its customer.
at 11/18/2006 07:22:00 AM