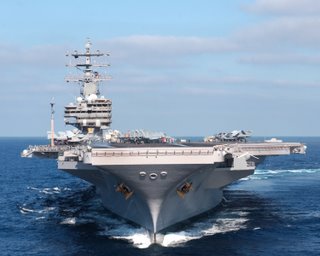 Ronald Reagan is participating in the FRTP as part of the Navy’s continuing effort to ensure ships maintain a heightened state of readiness for short-notice deployments in the event they are needed to support the global war on terrorism.
“This sustainment training will keep the Ronald Reagan and CVW-14 at the same level of performance we demonstrated during our combat deployment,” said Capt. Terry B. Kraft, Ronald Reagan’s commanding officer. “Our goal during this underway period is to refresh the skills we utilized earlier this year.”

During the underway period, Ronald Reagan and CVW-14 will be conducting various drills and mission-specific scenarios designed to improve both watch team and air crew proficiency. Some of the scenarios are scheduled to include exercises in strike warfare, air defense, close air support, and general quarters.

“We will stress every facet of our skills this underway,” said Kraft. “In today’s climate, it’s important that we maintain our combat state of readiness so that we remain ready to deploy without a lengthy training cycle.”

Since Ronald Reagan is one of the two aircraft carriers participating in JTFEX 07-1, Kraft said the ship and embarked air wing will play a significant role in supporting the training of the USS John C. Stennis (CVN 74) Carrier Strike Group that is preparing for an upcoming deployment.

Ronald Reagan is the Navy’s newest Nimitz-class aircraft carrier and returned to San Diego July 6 following its maiden combat deployment in support of the global war on terrorism.
at 11/15/2006 08:39:00 AM