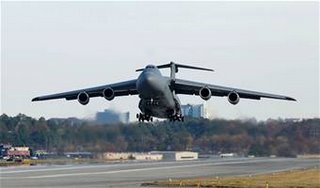 MARIETTA, Ga. (AFPN) -- The second fully modernized Lockheed Martin C-5M Super Galaxy test aircraft made its first flight Nov. 17 from Dobbins Air Reserve Base, Ga. This is the second of three aircraft that will comprise the new C-5M test fleet.

"Modernized C-5 Galaxy aircraft will improve the fleet aircraft availability and the overall reliability and maintainability, while reducing total ownership costs," Mr. Shultz said. "The C-5M provides the U.S. Air Force and American taxpayer with a significant return on their investment."

"We're excited about the C-5M," said Col. Devin Cate, 716th Aeronautical Systems Group commander at Wright Patterson AFB, Ohio. "Who wouldn't be excited about being on a new aircraft program? People can say it's an old airplane, but the C-5M is a new version. It has so much more capability than the current fleet."

C-5 aircraft which have completed the AMP process have logged more than 4,000 hours with the new system, many of which were flown in support of Operation Iraqi Freedom.
The centerpiece of the Reliability Enhancement and Re-engining Program is the General Electric CF6-80C2 commercial engine, which has more than 288 million flight hours on more than 229 commercial and military customers, including the VC-25s (Air Force One) used by the president of the United States. This engine delivers a 22 percent increase in thrust to the C-5M, a 30 percent shorter take-off roll, has a 58 percent faster climb rate and will allow significantly more cargo to be carried over longer distances.

The first test aircraft first flew June 19 and has logged more than 51 flight hours. It completed dynamic taxi testing at the Air Force Flight Test Center at Edwards Air Force Base, Calif., in August. This latest aircraft will be used mostly for utilities and subsystem tests, airfield performance, and diagnostics testing. Both of these aircraft were originally C-5B models. A third test aircraft to be brought up to C-5M standards, a C-5A, is currently in the final stages of modernization and scheduled to fly later this year.

With more than 2 million flight hours since entering the fleet in 1970, the C-5 has been the backbone of strategic airlift in every military engagement from Vietnam through Operation Iraqi Freedom. It is the only aircraft capable of carrying 100 percent of certified air-transportable cargo and includes a dedicated passenger compartment enabling commanders to have troops and their equipment arrive in an area of operation simultaneously.

For those of you who live in the SE US, here are some Lockheed freqs to watch for C-5M test activity on from the MT Milcom frequency vault.