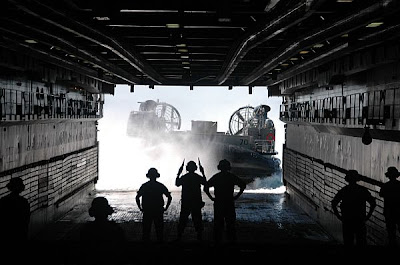 ESGINT, which began Sept. 24, is the second of three pre-deployment exercises designed to test the fundamental capabilities and shipboard interoperability between the strike group vessels and the 24th Marine Expeditionary Unit (24 MEU) out of Camp Lejune, N.C.

The entire Expeditionary Strike Group (ESG) concept is centered on the proven flexibility and combat power of a combined amphibious readiness group and a Marine Expeditionary Unit.

These capabilities give the combatant commander a wider variety of options and enables sustained independent operations in more dynamic and asymmetric environments.

NASSG’s ability to receive orders, process those orders and act quickly is crucial.

“It is fundamentally important to the strike group, to be able to accurately and effectively execute R2P2,” said Lt. David Pedersen, NASSG future plans officer. “It is important for us to be able to rapidly take orders, develop a plan that is executable, effective, safe and then execute it.”

Along with the ships and Sailors in the NASSG, the main mission of the amphibious ships is to get the Marines of the 24 MEU to their intended destinations worldwide in order to carry out the needs of a combatant commander and to execute the overall strike group mission of promoting stability and security around the world.

Taking into account that any commander’s most valuable assets are the Sailors and Marines under his or her charge, it is important to have a solid plan before taking action.

“The ship’s support of Marines in their crisis response planning is an integral part of the overall ESG capabilities and purpose,” said Lt. Cmdr. John Bandy, NASSG information warfare chief. “The purpose is to respond to any crisis around the world, whether those are military, humanitarian or diplomatic.”

“As an Expeditionary Strike Group [transporting and inserting Marines] is one of our missions,” said Pedersen. “It is what we do. We take Marines to the fight, and get them in the fight.”

NASSG Sailors involved in the R2P2 process undergo hours of classroom training from Expeditionary Warfare Training Groups (EWTG) to familiarize them with the process.

These training evolutions are followed by a joint planning exercise to help the branches better work together and then practical, real-world scenarios, such as those being tested during ESGINT.

In these scenarios, Sailors have had opportunities to work alongside their Marine counterparts and go through the planning process to ensure that everyone involved is working together and integrating plans, tactics and procedures.

EWTG is focused on training in the doctrine, tactics, and techniques of naval expeditionary warfare, with a spotlight on amphibious operations.

ESGINT is the second of three pre-deployment exercises designed to test the fundamental capabilities and shipboard interoperability between the strike group vessels and the 24 MEU.

Currently preparing for its regularly scheduled 2008 deployment, NASSG is made up of more than 5,000 Sailors and Marines, and projects sea power ashore by maintaining the capability of landing amphibious forces by helicopters, amphibious track vehicles, air cushion landing craft, and assault craft whenever and wherever the need arises.
at 10/03/2007 07:14:00 AM