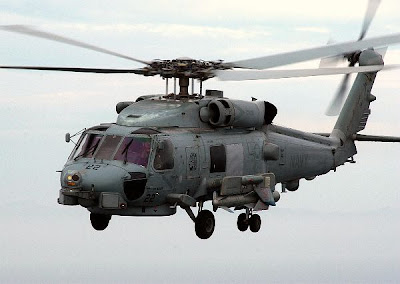 "The logistical hurdles of a San Diego-based detachment and a Pearl Harbor-based ship presented unique challenges,” said HSL-43 Det. 2 Maintenance Officer Lt. Greg Lembo. “Through an exceptionally long workup cycle, a pre-cruise maintenance inspection away from our home unit and the cross-deck of aircraft on the USS Bonhomme Richard, Det. 2’s maintainers and aircrew performed exceptionally."

Det. 2 departed San Diego for deployment April 10. Once off the coast of Hawaii, the strike group conducted anti-submarine exercises before Chung-Hoon and HSL-43 detached from ESG-5 and chopped into the Persian Gulf.

Upon arrival, Chung-Hoon and Los Gatos Locos locked arms with Combined Task Force (CTF) 150 – a multinational naval coalition established near the beginning of Operation Enduring Freedom and comprised of naval ships from Canada, France, Germany, Pakistan, the United Kingdom and the U.S. Together they conducted maritime security operations in the Gulf of Aden, Gulf of Oman, the Arabian Sea, Red Sea and the Indian Ocean.

During this time, Los Gatos Locos were asked by Somalia’s Prime Minister Ali Mohamed Gedi to provide assistance to a commercial cargo vessel in distress. Despite a high sea state, the vessel’s inability to maneuver, and several large hazards scattered along the length of the ship, the aircrew successfully lowered several weeks’ worth of food, water and supplies, giving the stranded crew the time it needed to eventually return to port under its own power.

“[Aiding the Somalian vessel was] a great opportunity to help others in need as well as put my training and skills to good use,” said HSL-43 Aircrew Member, Petty Officer 2nd Class Tyler Brock.

The aircrews monitored maritime traffic and supported 31 boardings performed by Chung-Hoon’s visit, board, search and seizure teams, while logging a total of 350 flight hours.

“We were only a few hundred yards from those oil platforms,” said Lt. Cmdr. Chris Herr, Det. 2 officer in charge. “Every member of the detachment could see what we were defending and put forth an incredible effort to accomplish the mission.”

According to Lembo, the work accomplished on the deployment could be described in two words, “truly inspiring.”

“The Sailors of HSL-43 Det. 2 endured a demanding deployment schedule, a multitude of aircraft and equipment challenges, and prolonged operations in the extreme conditions of the Northern Arabian Gulf,” Lembo said. "Their combined efforts and teamwork allowed for the execution of 930 mishap-free flight hours in support of Operations Enduring and Iraqi Freedom.”
at 10/20/2007 07:45:00 AM