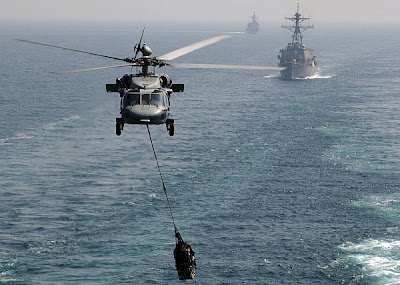 HSM-41, the Fleet Replacement Squadron, was the first Helicopter Anti-Submarine Squadron Light (HSL) to transition to HSM, in December 2005, when it received the Navy’s first MH-60Rs to train pilots and aircrew on the new airframe.

For HSM-71, the name, mission, and airframe aren’t the only things that are new. Despite its roots in the HSL community, the squadron will not deploy as individual detachments. Rather, the entire squadron will now deploy as part of the carrier air wing, as a second helicopter squadron, and provide detachments to the strike group’s ships. With this change, HSM-71 will join HSC-8 in Carrier Air Wing (CVW) 9, aboard USS John C. Stennis (CVN 74).

“They bring newer, more reliable systems,” said Capt. Sterling Gilliam, commander, CVW-9. “They will also be able to completely control the battle space in the vicinity of the strike group, providing greater flexibility to the air wing and strike group commanders to project power across the globe.”

Combined, the MH-60S and MH-60R will provide the fleet the capability to not only perform anti-submarine and surface warfare, but a variety of missions.

“The Sierra is designed to operate in an over-land environment where there are threats,” said Cmdr. Larry Vincent, Commanding Officer, HSC-8. “The helo has a self-defense package and offensive weapons. I think we can really make an evolutionary leap forward in how we use this aircraft, especially in a joint environment.”

“The Romeo does a lot for anti-submarine warfare. It brings the capabilities that were in a couple of different airframes into one,” said Cmdr. Michael Nortier, Commanding Officer, HSM-71. “Also, with the advances in technology and training for our Sailors, we’re providing five to 10 times more coverage than we have in the past, which is a huge improvement in how we defend the strike group.”

In line with the Chief of Naval Operation’s guidance for building a Navy for tomorrow, helicopter CONOPS will reduce airframes while at the same time effectively increasing capability.

“Helo CONOPS will provide us much more flexibility and agility to project power and to protect the strike force due to [the helicopters’] multi-mission aspects. The way we will utilize our resources will also be more efficient due to fewer airframes,” Gilliam said.

With the new helicopter CONOPS, HSM-71 and HSC-8 may now have some new missions and challenges in front of them.

“There are definitely going to be plenty of challenges, but my excitement is about the people,” said Cmdr. Michael Nortier, commanding officer, HSM-71. “The technology is there, but now it’s getting the great Sailors we have to focus and find out what the true capabilities of the aircraft are and how we’re going to employ them.”
at 10/12/2007 08:36:00 AM