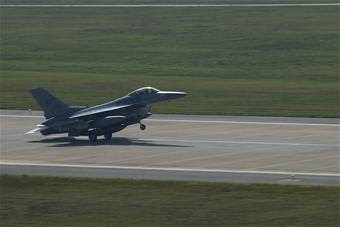 The aircraft arrival marked the first group of upgraded F-16s flown to Korea. The aircraft were flown here from Eielson Air Force Base, Alaska, by members of Kunsan's 80th Fighter Squadron.

The addition of the upgraded fighters will increase the mission capability of the wing.

"The airframe and avionics are newer, which will help our combat readiness," said Lt. Col. Thomas Klopotek, 80th FS commander. "The aircraft provides us with better communications and advanced technologies which will make things easier for the pilots as well as the maintainers."

Some of the avionics changes include the Link 16 Multifunctional Information Distribution System, the Joint Helmet-Mounted Cueing System and a modular mission computer.

"This aircraft has brand new modifications which gives us a lot of datalink capability," Colonel Riza said. "It also provides us a helmet-mounted sight and a better radar capability than the Block 30. We are more capable now with this aircraft."

Colonel Klopotek said the helmet-mounted sight provides many benefits for F-16 pilots. The helmet is connected via cable from the plane and provides the pilot important information displayed on the helmet's visor directly into the pilot's field of view. With Link 16 datalink, a pilot is able to know what other platforms are tracking and the helmet adds increased situational awareness.

"Wherever you're looking, that's exactly where you can cue any weapon or sensor on the airplane," Colonel Riza said. "This provides us a lot better combat capability."

Although, the new aircraft provides better combat capability, the arrival of the new Block 40s does present some challenges.

"The new technology can be a bit of information overload," Colonel Klopotek said. "One of the training challenges we face is how we're going to learn to prioritize and adapt our current training habits from the Block 30 aircraft into the new capabilities and technologies that we can leverage in Block 40."

With the first batch of CCIP aircraft arriving, members of the 80th FS welcome their newest addition.

"We're proud to be selected as the squadron that will undergo this transition in Korea," said Colonel Klopotek. "We're not the first unit in the Air Force to have gone through CCIP, but we hope to take past CCIP fighter squadron transition experiences and incorporate them to make our conversion faster. We then can be that test bed for other units on the peninsula that will go through the same upgrades in the future."