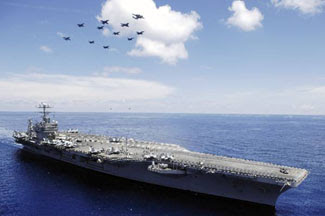 Milcom MP Note: For my SoCal readers the Abe Lincoln is underway in the SoCal Op Areas. The activity beiong reported on some newsgroups is not the USS Nimitz CSG. They are headed towards WestPac.

The strike group is off the coast of Southern California conducting the training under the terms of a preliminary injunction that was partially and temporarily stayed in federal district court.

Winter and the media representatives visited command and control suites on the aircraft carrier and on the Arleigh Burke-class destroyer USS Momsen (DDG 92), and flew an ASW mission with Helicopter Anti-submarine Squadron (HS) 2 "Golden Falcons."

The strike group was participating in a Joint Task Force Exercise (JTFEX) to prepare it for an overseas deployment.

"It is incredibly important for me to stay current on what is happening and see the changes that are implemented," Winter said. "It has helped establish a perspective for me that I can use in terms of future briefs, testimony and discussions with the press."

Members of the press observed the Navy's protective measures to preserve marine life while staging meaningful exercises in the area.

"I think this is a great opportunity to be able to actually demonstrate to the press something outside of the courtroom," Winter said. "This puts into context what it means to be able to provide proper protection for marine mammals and other elements of the environment at the same time we are conducting what really are some complex and demanding exercises."

Before the helicopter flight with the "Golden Falcons," Winter and the press were invited to the squadron ready room where a pre-flight brief was held, which also allowed time for the press to ask pilots and aircrew questions about marine life and ASW missions.

"Part of our mission is to report any activity, even if that may be marine life," said Cmdr. Terence Hoeft, HS-2 executive officer. "If we are going to use sonar, it is required that we start looking for any marine life 10 minutes prior to dipping. If we see marine life, we report it to the controlling unit and tell them the location, direction and type of marine life."

Hoeft said the controlling unit takes that information and shares it with other ships. He assured the press in an event any kind of mammal breaches while sonar activities are going on, it is required that the helicopter crew take action to protect it.

"We have to stop if any mammal is spotted 200 meters from the sonar dome," Hoeft said. "At that point we will go passive on the sonar dome."

On board Momsen, Winter and visitors were given the rare opportunity to watch the glow of consoles in the ship's bridge, Combat Information Center, and Sonar Control suites as Sailors relayed information about a sighting and the ship reduced active sonar output to maintain a safe buffer zone.

"What we simulated today was powering down our sonar as we closed within 1,000 meters of a whale," said Lt. Cmdr. Marc Deltete, Momsen's operations officer. "When that happens we power down to 6 decibels, a 75 percent reduction in strength and range."

Deltete said ASW is a core mission that the strike group must be able to practice to do well.

"It's a science but it's also an art and if we don't have an opportunity to practice it we'll stagnate," he said. "At the same time, we have to strike a balance between our training and the environmental requirements of operating in this area."

Before departing the strike group, Winter delivered a universal message for the Sailors he had met. "Thank you for your service and I would like to thank your families for their support," he said. "God bless you all."

Lincoln, Momsen, HS-2 and other elements of CSG 9 are conducting JTFEX as their final exercise in preparation for an overseas deployment in March.
at 1/31/2008 08:25:00 AM