Port Royal and Hopper COs Discuss Incident in Strait of 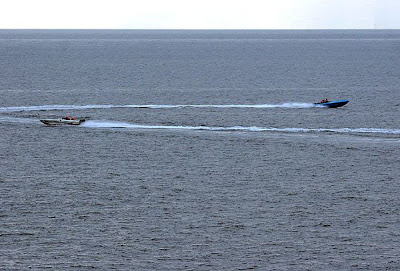 Both commanding officers expressed that the Port Royal and Hopper crews were professional and followed proper procedures when they encountered five Iranian boats maneuvering erratically around the ships.

"As we felt the threat rise, we went through our cautionary steps, such as increasing radio queries and using the ship's whistle to warn the boats," Adler said. "We are very well trained in what we're doing here, and I think that we did exactly what we were supposed to do. I was very proud of the way that the crew preformed."

James pointed out that the crews' procedural actions prevented a potentially dangerous outcome.

"We stepped through our measured procedures to let the boats know who we were and what we were doing, and that we perceived their actions as threatening," James said. "We gave them the opportunity to break off, so that we didn't have to go the ultimate, which would have been deadly force."

Adler also mentioned that the U.S. Navy's regular transit through the Strait of Hormuz is to support regional stability.

"We're here with the 19 other Coalition countries to keep the sea lanes open for international traffic," Adler said.

Port Royal and Hopper are part of a routine rotation of U.S. warships to the region, and their operations are focused on reassuring regional partners of the Coalition's commitment to help set conditions for security and stability. U.S. forces maintain a naval and air presence in the region that deters destabilizing activities while safeguarding the region's vital links to the global economy.

Port Royal and Hopper are well-positioned to respond to any potential emergent situations. Their inherent capabilities will be used to train with regional partners and enhance existing cooperative relationships with an aim to support regional country's struggle against violent extremists. The ships also bring state-of-the-art command and control elements that are well suited to provide humanitarian and disaster relief support if required.
at 1/18/2008 07:22:00 AM