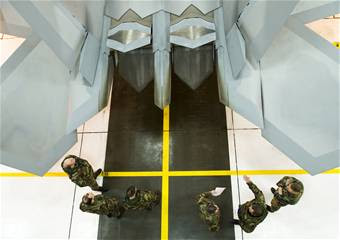 The training was to prepare for the possibility of a Raptor being unable to land on Elmendorf and needing to divert to an alternate airfield.

"During extreme winter conditions, Elmendorf's airfield can become too hazardous to land on for short periods of time," said Lt. Col. Gator Platt, the 477th AMXS commander. "In these times, Elmendorf's aircraft could be airborne, requiring divert fields, like Kulis, in which to recover."

With the varying experience levels of the Kulis Airmen, the Elmendorf crew chiefs went through detailed, step-by-step instruction to ensure safety of the maintainers and pilot.

"We're teaching them the exact procedures used after a Raptor lands on our runway," said Staff Sgt. Wesley Correro, a 477th AMXS crew chief. "After these (unit training assemblies), they will have ample training needed to recover the aircraft."

Some of the Guardsmen have been trained on recovery of heavy aircraft such as the C-130 Hercules and C-17 Globemaster III.

"Some of our guys have prior-service experience and had the opportunity to handle some of the aircraft, but the Raptor is one that we haven't had first-hand experience with," said Senior Master Sgt. Kerry James, the lead Guardsman who attended the training.

Beginning the training early, the crews worked until late afternoon.

"The Airmen of the 477th AMXS are some of the best around," said Colonel Platt. "I am confident that these opportunities will provide the Guard the training to help fulfill our mission at Elmendorf."